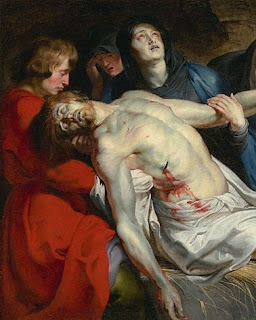 Many Orthodox Christian churches often observe Good Friday at a later date than the Good Friday date observed by many western churches.
Good Friday focuses on Jesus Christ’s death, which is described in the Christian bible.

What do people do?

Great Friday is a strict day of fasting for many Orthodox Christians .

Some Orthodox churches begin observing Holy Friday on Thursday night where the liturgy’s main feature is the reading of 12 sections from the gospels, all of which are accounts of Jesus Christ’s passion.
Other churches may have a Good Friday liturgy in the evening. Some priests remove icons of Jesus from crosses and wrap them in linen to reenact ancient burial rites.

Some Orthodox Bulgarian churches have special traditions, which include allowing people to pass under a table in the middle of the church and light a candle after the church bell rings.

This ritual is believed to wash away one’s sins. Many families of the Orthodox Christian faith may spend time on Great Friday to decorate Easter eggs as part of the Easter preparations.

Many Orthodox churches retained the Julian calendar after the Gregorian calendar was introduced in Europe in 1582.
Therefore they often follow a different Easter date compared with many western churches. Easter holidays, such as Good Friday, are “moveable feasts” as these dates change according to calendar calculations.

There are different types of Orthodox churches that are well established in the United States.

The Russian Orthodox Church in North America can be traced back to the late 18th century, where a Russian church was built on Kodiak Island in Alaska during that period.
Alaska was previously part of Russia. The number of Greek Orthodox churches grew as Greek immigration increased after the late 19th century in the United States.

Jesus died to prepare mankind for his Fathers World
He died in Faith
He died leaving people to believe he would resurrect into life everlasting.

His death brought upon dark clouds and a storm they say.

Today I look out my window and the wind has been blowing a few days now threatening
stormy weather.
Is it a fluke?

I have noticed it before in previous years.

Thank you for a wonderful Good Friday post. It's nice to learn about the traditions in other churches. I hope you have a truly wonderful and blessed Easter.

George Yes I always enjoy it.
There is always so much to learn.
and it keeps you on a balanced plain.
Its great for kids. Hope you spent a nice day with your parents.:)

Thanks for your support to Blogtrotter Two, now departing Miami by air; my Easter egg for you... ;). Have a great weekend!!

I have been watching the weather and it seems to be getting windier and colder today. Spent most of the day cooking Hope you have a good one:)

This post has me thinking of what it is to love and be loved. Beautiful.

As a child I used to be drawn to the three hour Good Friday service of the Catholic Church. To this day it's always the first thing in my mind whenever I think about Easter.

Rising Rainbow: I think it is a good thing to be reminded that there is something beyond our comprehension that is both powerful and merciful and loves us.
Next to man there is the crocodile that is a survivor.
What a difference between the two lol

Happy Easter to you:)