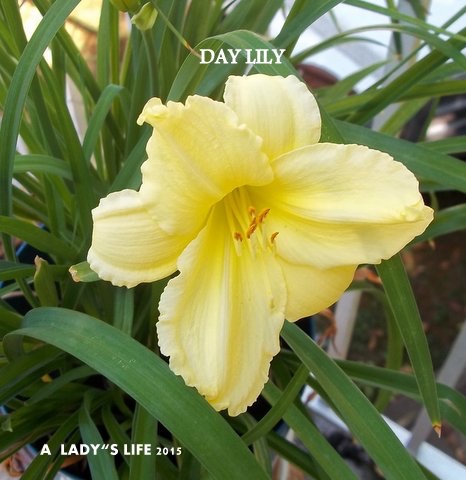 We were hit hard on our street by winds and rain.
Trees fell and we lost power for 2 1/2 days.
The streets were closed due to trees falling.
So many places were hit in BC, they did not have enough staff to repair
the damage. Traffic lights are still out and many detours leave people
looking for new routes to take.

Tropical fish are headed North in a warm water bubble, including sharks.
Will be an interesting winter.
Our reservoirs will be full again though. No more water shortage.
This summer BC had so many forest fires every one smelled smoke all summer.
Some roads had to be closed off due to fires and smoke.
Fires across the border also did not help air quality here as everything goes north.
It being dry did not help. Now I am sure the rain quenched the dry earth.
It was  very welcome to be sure. Hasn't stopped since last night.
Some vin yards said they had a big fire 8 years ago and could taste ash in their wines.

We have a big tree in the back yard we will have to chop up.
Have no idea what kind of tree it is. It has feathery ends with white flowers and tiny blue berries on it. Looks like Elderberry. Its a very good tree to have but you need to know how to harvest it for wine
syrup etc..
Good for the immune system inflamation congestion. etc...
The wood is very light. You don't need a saw to break up the branches.


This day lily grows in ditches. It is so beautiful and lilies are used to treat things like breast cancer, mastitis, urinary tract disorders, uterine bleeding and arsenic poisoning. The roots are diuretic, anti-bacterial and anti-parasitic. 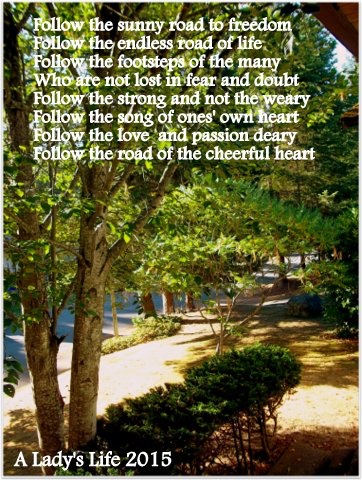 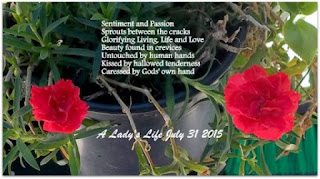 With A Strong Arm, I Am He. 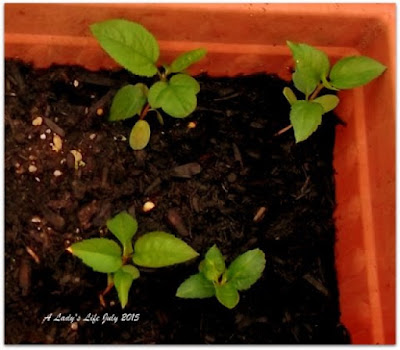 Seeds produced these little offspring, but what are they?
Hopefully apples.
Would be nice to get some trees growing.
Johnny Appleseed was a wonderful person with a very good idea.
If only more people who trek through the mountain sides,did this,
there would be better chances of survival for both animals and people.

Tom  Zytaruk has been writing in the local papers for a while now.
He touches upon local painful issues that plague the cummunity and it is because of
what he reports that I've been reading his columns.
He reminds me of Val Kilmore who played Bat man. (Don't ask me why.lol)
Tom's last article gave me a chuckle. He finally got a head ache. lol
I have been having a head ache from his column for many years.
It had nothing to do with noise.
It had to do with so much wrong in this world.
Not only that it is wrong but that people do not realize that how they live their lives,
opens doors to these wrongs and then every one has to sit in it.


"Violent crime in Surrey has skyrocketed by 34 per cent, with attempted murders six times that of the first half of last year.
Newton led the city with the spike in attempted homicides, experiencing a 900-per-cent jump in the first six months of this year compared to the same period last year.
It was followed by Whalley at a 300-per-cent climb in attempted homicides,  while other communities saw no change.
Homicides were down 33 per cent overall.
Police say the large amount of attempted murders are due to the drug turf war playing out, largely in Newton and Whalley, where two groups are battling over a dial-a-dope operation.
......."

Now all what these good reporters report, touches upon children and this is where my heart lies.
So I fight with the words from the 10 Commandments and boy do I get blasted and get bad head aches.lol

Many people write ...well just because a few people are bad.......doesn't mean we all are and we take drugs and drink alcohol but we can manage it. They call you all kind of filthy names which make me
ask why?  What dirt do these people lie in to make them hate a person who only wants to see them do well?

To these people I retort.... can you?
It's bad when people try to fool other people but when they fool themselves, .....

Can you actually say you can manage your life with drugs and alcohol, when so many other people
who don't use, can't?

Since I was a kid in the east, we read books on how many people suffered from alcohol abuse
and neurological diseases from polluted water, in BC.
These kids have grown up now and they too have kids who probably follow in their parents footsteps. They too have kids.
So the support for drugs and alcohol increases and police as a result, have a battle that is very hard to win.
When stuff runs rampant and brains are destroyed because of prenatal abuse, problems get larger.
Things which are not ok become ok because these people grow up and take over cities, governments,
and international affairs.
As a result they hurt and destroy more innocent people. News travels fast and more of the wrong people are attracted to come to BC, to do more of the same. Everything and every one is infected.

If things continue to go as they are, Tom Z won't have to worry about noise due to population explosion.
Populations will die because laws are not enough. Laws do not rule. Disease, crime, wars.....they rule.
When you have a willful population without conscience, anything goes.

When you desensitize people into thinking everything is ok and we can manage, what does this mean?
Can we manage?

Well, with a lot less people, it's easier to manage, with a strong arm.
xoxoxxo