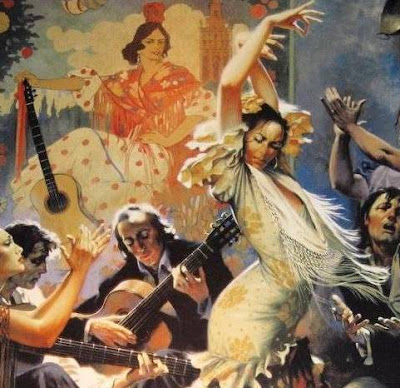 Tap Dance to the melody

Never mind who lives or dies

You left me shaking at the gate

I don’t know how long I stood

You tore the strings of my guitar,

I will never play it

You left a fire in my heart

I will not deny it

Today I play a violin

And your precious daughter dances

She asks me where her Mommy is

I say, she’s travelling with Colossus

I since heard you’re alone again

Sometimes a gypsy hearts to blame

And sometimes it’s the choices

Of broken hearts and sadness

Remember I am still your friend though

You’re not the Goddess Isis.

This poem depicts a woman who feels claustrophobic being tied down to one place No ones to blame for her leaving. This man is still bitterly in love with her. She tore the strings to his guitar which symbolizes complete separation He is watching his beautiful daughter dance to the violin he now plays singing a sadder melody, to make her,one day, more powerful than her mother He tells her, her Mother is on a special mission with Colossus, built in honor of Helios A young Greek sun god who rises in the morning from the ocean and rides a chariot pulled by 4 horses in the sky He refers to his wife as not being Isis, a goddess of , also worshipped in the Greco Roman world, as an ideal Mother ,wife, matron of nature and magic.Both Mother and daughter will always be very precious to him.Which makes the story so much sadder.

Francois de la Rochefoucauld
When we are in love we often doubt that which we most believe.