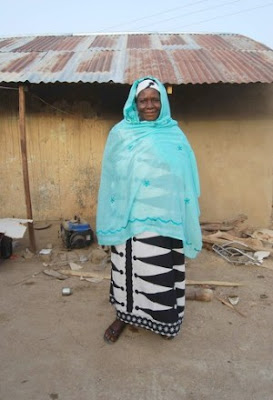 European history is flooded with stories about kings and queens but rarely do we hear about
African Queens. This story was in our Vancouver Sun Sat, Apr,24 2010.

Queen Hajiya Hiadzatu Ahmed
She is Muslim Queen of a place called Kumbwada, Nigeria. Her people consist of 33,000 poor farmers.
Her own place of residence is very poor, consisting of a shed.

Kumbwada is always ruled by a woman because of an ancient curse which kills off any male rulers.
Nigeria does not allow women to rule, because of Sharia Law, so this curse must be very serious.
Queen Hajya's grandmother ruled for 73 years till she died at 113 years of age.
Her own Father expressed only a desire to rule and came down with a serious illness which almost killed him
Muslim Clerics do not believe in the curse saying it must be some kind of witchcraft which is not allowed in Muslim beliefs.
According to SheikAminuddeen Abubakar, imam of the Daawa Mosque in Kano, this must be reversed but Musa Muhammad the chief Imam of Kumbwada, supports the Queen saying this situation is special.

The Queen handles things like divorce disputes quarrels petty violence theft neighborly conflicts.
She says politicians do the other work but the people feel closer to royalty because their votes are not bought.
This soft spoken Queen says she is not educated but there has not been one case she could not resolve and she doesn't like to hand anything over to the courts to do. She hates divorce and will not tolerate the beating of women.
I liked this story and I say you GO GIRL!!!

When I lived in China I found this Red Doberman pup, kept in a very small crate with its feet dangling out. She looked so pitiful with calluses all over I knew I had to buy her. I paid 250 dollars for a very sick dog. When I took her to the vet the next day, my dog was growling in pain with a high temperature. The vet accused me of abusing the dog. I told him I took her because she was abused and showed him the paperwork.
Well it took time but the dog healed and she trained so well. I was very proud of her.
We had to move and I couldn't take her with me so I put up an add in the store for a family to take her.
Well I found out no one took females because apparently they were dumb, which of course is not true. Females have puppies and so they are anything but dumb.
She ended up living in a Generals house, who loved Dobermans and was very impressed with her.
She was lucky.
In a man's world, women are not given a fair shake. You would think they would smarten up.
I am truly grateful for North America because I was raised to be proud of being a woman and I would never change this for anything.
I believe the world would be a safer place to live in, if women were in control.
Women hate war and violence as a general rule.
This Queen has a kind heart and seems to be doing a great job.
So I support her and hope more women get charge of things in what otherwise seems to be a man's world. In so far as Eve was developed from the rib of Adam, and in so far as woman gives birth to both males and females, they are one and the same.
:)

I am with you!

This is very interesting. I had not heard of any African queens before this and found the story of Kumbwada to be fascinating. Thanks for sharing it with us.

Thanks Guys. Africa is a very interesting place.
When they say Cradle of Civilization, you always think the Middle East but actually its lower down in South Africa.