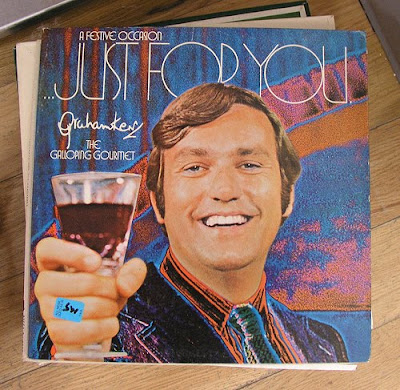 I used to love the dashing Galloping Gourmet, otherwise known as Graham Kerr.

He always added wine to everything he cooked as well as drank it on the air and his nose would light up like
Rudolph the Red Nosed Rein Deer.
He was very entertaining and always invited a member of the audience to try out his dishes.

The names of his dishes were just as distinguishing as his show.
For example:

Every day was a surprise in his kitchen until he had an accident which left him
temporarily paralyzed.

After he sobered up he got into healthier food recipes but his show was not as
funny and then he disappeared from television.

He did get some Emmy’s though
This is a short write up on him.

“In 1969, TV chef and cookbook author Graham Kerr made a splash with his show -- The Galloping Gourmet, seen by about 200 million viewers in 38 countries. His fondness for high-fat ingredients led Weight Watchers to brand him "The Most Dangerous Man in the World," but after he and his wife Treena became Christians, all that changed. Now, the Kerrs tell what they’re doing differently to improve their own health while saving money to feed the poor. ”

I never watched the Galloping Gourmet, although I have heard of him. I'm glad to learn that he has gotten his life together.
Your puns are so bad they're good.

Hi Lady! So, I was making jokes on your calendar andsuddenly it went away... Quite busy posting ately, I see... ;)
Lovely that of the eskimos... ;)

Blogtrotter Two is waiting for you in Turkey.... ;) Enjoy and have a great week!!

George I tried to get something to go with food lol


Thanks Blogtrotter : Trying to do some simple research for the kids out there writing essays and then I figure they are good for the blog as well. So it keeps me busy.
OK. I will meet you Turkey :)

The cannibal joke is gorgeous.

Peter I liked the seafood disco and the pulled mussel.

I have never heard of him before, although I do love cooking programs. Loved the jokes, especially that last one!

Jientje: He must be old by now but he sure had a funny show the way he cooked throwing that wine bottle around lol
I used to watch and think that this show is going to do him in and it did lol I think towards the end he drank even before the show started cause his nose was always lit as a light.He was so happy and good natured it was hard not to like him. lol Chefs are usually hard to please and when they scuffle in the kitchen all the knives fly.Its like going to the circus. lol