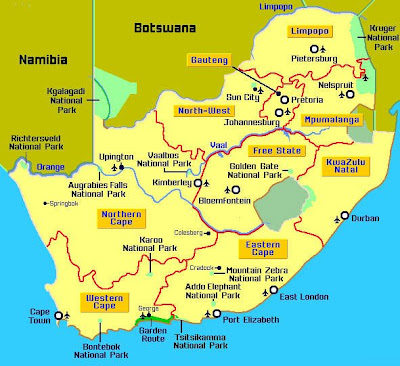 Cradle of Humankind is in the Guateng Area.
in the North West of South Africa.It is a world heritage protected site.
This 47 hectares area is rich in fossils dating back 2-4 million years ago
that give us an idea about our human species past.
They have around 200 caves to visit, about 17 fossil sites and our human
relative Australopithecus AFricanus was discovered there.
This map doesn't show but there is a mountain range that runs down both the west and east sides of SOuth Africa,beside the oceans.

Karoo National Park
is in the lower middle part of the map.
In the middle of no where, it consists of mountains rolling plains and harsh conditions
which make it a fascinating place to visit to see what life
exists there .

Cape Point
Is found at the southern most part of South Africa.
It has the freshest air in the world coming in from
the Antarctica. This is where two Oceans meet.

Table Mountain,
North of Cape Point is a botanist's dream.
It has over 2,250 plant species, some of which we never saw before
and it has a soccer field full of certain non migratory butterflies
that can't be found anywhere else in the world.

Tsitsikamma Forest
is said to be a magical place where the clawless otter lives.
You can find deep sea fishing,dolphins and whales there.

Drakensberg
is where the Zulu Live It s an area which resembles a chain of unyielding dragons
The Mountain is the highest in South Africa tipping at 3,451 meters.
Mount Everest tips at 8,848m or 29,029 feet and in Canada we have Mt Logan tipping at
5,959 m. second only to Alaska's Mt KcKinley.

We don;t hear much of South Africa but it sure looks like a great place to go to learn from, not to mention all the local stories.They have their own Bermuda triangle nearby, pirates and South Africa has plenty UFO stories.
:)
Posted by A Lady's Life at 5:26 PM

South Africa is indeed a fascinating and lovely place. I enjoyed very much the two years I spent there. And I would like to go back, I still have friends and acquainences there. And some of the "men's historic" sites I even have seen.

Oh gosh Peter that must have been wonderful!
I was curious about the two oceans meeting that might cause ships to go down in an undertow.
Have you heard of anything like this?
Recently they have had UFO stories but one at least has practically been proven false and well pirates, have always been down the African coasts since ages.

The area in the vicinity of Cradle Of Humankind is of outstanding universal value, because it contains a complex of palaeo-anthropological sites, which have yielded some of the most valuable evidence, world-wide, of the origins of modern humans.