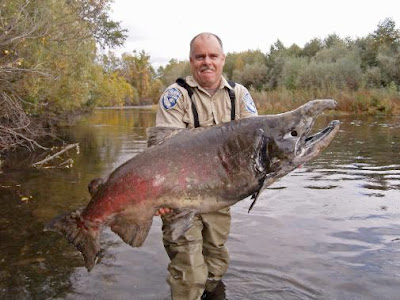 We live in one of the best countries in the whole world.CANADA.

In we have Salmon which is a treasured fish

We have many controversies over fishing rights,how many fish we can catch,

Who can catch them, who can breed them, where they can be caught and bred,which fish we can keep with them,

And keeping the environment clean so they can survive and keep coming back to spawn.

We care about our fish.

So why am I talking about fish? Well fish are families. A lot of them swim in schools.

The life of a Chinook fish is similar to a human being in some ways.

They head on back to the place of birth to spawn and then to die.

They are born, they are raised, they go out into the world and then they nest.

The difference between humans and Salmon, is that humans after giving birth do not have to die

Salmon,can’t get jobs.They can’t hunt for their children so they commit the ultimate sacrificial act of dying,

so that their children can feed off of them and live. Survival of the species.

I guess in the end fish get a better deal. They don’t waste time in slavery.

They die and donate their body for the better good.

Man does not want to die. He figures he wants life,so he can sacrifice a little bit, working to feed the kids until they can go off by themselves .

This takes practically a lifetime to do and then you sit and enjoy grandchildren.

This is the scheme of things.

They are orderly and follow a sequence of events.

But in real life, things don’t always work out as we plan.

They prey. They prey on women without being responsible.

We also have women who prey on men.

So the sequence or order of life is disturbed.

Now we can go out of our way when it comes to fish to ensure the survival of the species,

and call it fish rights

But when it comes to man, we can’t do those things. Human Rights have a whole new concept.

Human rights does not include survival of the species by creating or doing the right things to ensure health and survival. I used to think it had a limited meaning dealing with man's inhumanity to man in the strictess sense.But it doesn't.

Every person can abuse himself, his body, the bodies and minds of others and be protected by Human Rights.

By virtue of association, be it through sex or touching or general living,Human Rights cannot protect us from self destructing

or destroying others by virtue of our behavior.(ie I have sex, I get aids, I unknowingly give it to others.)

What is HUMAN RIGHTS? What exactly does it mean?

It seems we care more about fish rights than we care about humans.We are not allowed to use Human Rights to aid humans when a human cannot do it for himself.There has to be consent or a paper from a judge.

So little wisdom when it comes to humans?

The fish is not asked if it wants the species to survive.

And if you ask man….. he says he has a right to drugs,breeding, prostitution, alcohol, smoking ,etc…

And he doesn’t generally think about the survival of the species but he wants HUMAN RIGHTS.

The answer lies in value.

Fish have financial value as a species.

Men do not.No one wants to eat us except maybe bears but they don't pay.

Fish all think the same way.

Men do not, well except for the odd one in a fish tank :)

So when speaking the words Human Rights, we have to understand the meaning of these words and ask

ourselves a question: What is a right of a human? Do we really have any rights? Or are they privileges?

Do humans have a right to destroy a planet or other humans, by virtue of their conduct and lifestyle,

risking the death of a species called human?

If the answer is no, then should not man therefore understand the value of following a pattern

of behavior like the fish do?Do we not understand what not being on the same page in following this pattern of behavior could result in? So why do we use the word HUMAN RIGHTS

as a shield or excuse, to cover up an underground movement,leading towards the breeding of weaker people,

who will one day, not be able to survive simple things like colds?

It seems our interpretation of Human Rights is very lax

and includes both things it should and should not, virtually leaving it ,

with no meaning at all.

Whoo, I have to read it again. But it is great. Good food for thinking. A lot.

I left a comment but it isn;t showing lol
I just meant that Human Rights are basically meant to curb mans inhumanity to man.But its not working because man is not behaving humanely with respect to himself.
The body is a temple but it is treated like a trash can.
People who do evil have more human rights than people who are good.
When man has a reason to save fish, he in a sense passes laws to save himself because whats good for a fish is good for man. lol
If I say for example using drugs is not a good thing for me, then why should it be a good thing for someone else (unless it is medicine).and the other person says, for example, I have human rights to take these drugs.and I need laws passed to make them legal.
Then I say well then what happens when you have no money, then he says then I go on social welfare or kill you.So we are not discussing man's inhumanity to man.
We have two issues here using the same HUMAN RIGHTS. One is protecting man and the other uses it to make demands on his right to self destruct and destroy others.
So it makes the principle of HUMAN RIGHTS null and void.

and mans inhumanity to man continues regardless.