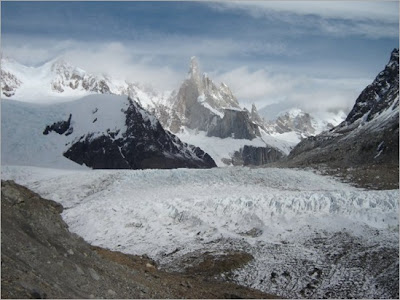 I came upon this book called The Wildest Adventure:
Metal and Ice in Patagonia by Abigail King.
She is a travel writer who dared to venture through this,
what I would say, a world of worlds, where breath taking
pictures like this could be taken.
Its a frozen solitary world and yet I am sure if scientists
had their way they would find life where we never thought
possible.
This writer's back ground is medical so she might have
things up her sleeve she might not be telling us.

Patagonia is part of the Andes Mountains and located in
the areas of Argentina and Chile. Its supposed to be a plateau
area.
The word itself comes from the word Patagon a name they gave
to a native people, Magellan, a Spaniard, thought to be giants.
In actuality they were only 5'11'' but Spanish people were
short in those days.
I believe in the olden days many people must have been short because the old
forts we visit in Canada have very narrow steps which require
small feet.
I thought this book was worth mentioning because of this particular shot.
Well done to the photographer. I am cold just looking at it.
So majestic and pure.It must have been no small feat to get
his camera gear up there.

This clip I thought was worth watching as well.

That is a powerful video. We should try to find some other way to resolve world problems.

Would anything other than force have stopped Hitler, though?

Jen = I still believe in education.
To have a war you need followers, believers which means soldiers willing to fight. If a soldier does not believe in death and dying and war, then he will not fight.Americans believe in freedom. Its a great thing to have. Its a horrible thing to lose.I believe if you have to fight, fight to free people. Fight so people can come home and live where they are happy.Don't displace people, don't uproot them.
And fighting doesn't mean with just bullets, it means through education.People believe in God but it is false that God wants you to beat your head on a wall all day, or do things what Muslims expect of their people. Man was born free, on land that is free.
If you want to be philosophical, then the owner of this planet is God and I never heard of him selling anyone anything. He gave Adam and Eve a nice place to live for free.To know and have a bit of everything is good but when you get to be fanatical, then we have a problem.

Its videos like this that the young people should be watching now and days instead of the violent and offensive R rated material thats on t.v. all the time. Senseless garbage that noone should watch. self censoring should come back!!! Thank yo for posting such a refreshing and caring video clip.

Victoria Malloto : Wow.
Thats very hard to do these days with advanced technology and children especially don't know how to do this
People trick you into watching things
But I do know that actors, Prime Ministers, like our Pierre Trudeau etc... do not allow their children to watch TV. They try to give their kids a childhood. So they must know
something right?