Resolve It In Your Dreams. 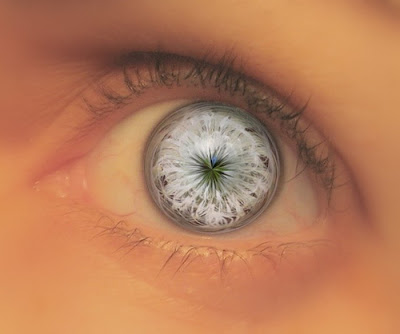 The park was green, lush and very well maintained.

Oak trees mixed in with elm and birch alongside a field one could only describe as golf grass,

no weeds, all level and well fertilized. The silence was deafening.

I aimlessly wandered with my shepherd along the dirt path, admiring the view when Max stepped onto this meticulous lawn to pee.

I turned my head and saw what looked like a herd of beautiful Golden Retrievers, playing, running. They looked so free and happy it lifted my spirits to watch them.

Both Max and I stopped to gaze at them.


In the middle of the field appeared a small, thin woman, dressed in a light two piece white suit and page boy white hair. She looked out of place standing there all by herself. It was as if she was pasted onto the field.

I took a closer look and saw her staring at me. It began to alarm me to see that her eyes were pitch black, almost hollow looking.


At that moment a young Golden came to entice Max to play on the field with her friends.

Max raised his ears and was getting excited, wanting to join them.

I realized Max was trespassing and quickly pulled him off the lawn, back onto the dirt pathway.

This action angered the Golden who now began to growl and lift it's lips exposing incisors I didn't care for nor expect from a Golden.


It dawned on me that these dogs weren't as nice as they seemed and they were ready to rip Max apart if he took part in their play . All of a sudden everything had a sinister look to it.

As long as Max stayed on the earthen path, he'd be ok because I saw they couldn't leave the grass.

I glanced up to look into the eyes of this woman in the field who I now recognised as death and all I could ask her in my head was......WHY?

Why did she want to hurt me by taking the thing I loved the most?


I woke up with a pounding heart and immediately the thought came that death was here for one of my Kids and since Max belonged to my oldest son, I feared it would be him.

I jumped out of bed and was ready to confront death and tell her to back off, because she wasn't getting him.

Finding myself at my son's door I opened it to see if he was breathing and finding that he was, relaxed. I checked the other door and my younger son was also ok.

The whole day I worked myself up thinking up of ways we could all die. There would be an earthquake, the earth would open and gobble us up, a 100 foot wave would come and swallow us, the sky would fall.


It was a sign to prepare for bad times.

How do you prepare when you don't know what will happen? Do you buy a boat? Do you build a shelter? Do you live on top of a huge mountain ? Or do you run... run as fast as you can.


It got to be complicated . I had to do something . Anything was better than staying a sitting duck.


Man is so little compared to the powers out there.

The waves, the storms ,the bombs, the earth, the universe......it's all out there, threatening us.


We really needed a miracle to survive.


Storms have eyes. Does the universe have eyes? Can we poke out the eye of the universe like we can a crocodile so he lets us go?Or do we try to be inventive like a turtle which can breath through its butt? Or do we grow 5 eyes like bees to see danger better just to have some one outsmart us like putting liquor on a scorpion, to make us go mad and sting ourselves.

My brain was burning. I felt like I was the brunt of a joke where men have boxes their brains live in and women are like... all wires all connected, buzzing, having to think about everything for every one. Why us?

How many times do we think about the ants we step on?

There are like..... 1 million ants for ever person. What do I care? Unless I needed to eat them.Every acre in the US, has about 100 pounds of insects We are even smaller to the powers that be. We are molecules, germs, diseases, viruses to them.

We give them problems because we know how to escape just like our germs do.

But I don't know. Where do I run? Where do I go? What am I supposed to do?

OK maybe analyzing how much copper and zinc I have in my hair to measure my intelligence is going too far?
I know it doesn't curl anymore soooo .... what does that mean?

Hey there's an idea. We should all live in the sky. Now that's a beginning to seeing the light.

Statistics show that if we compared to day with the 1900's half the people would not be alive. 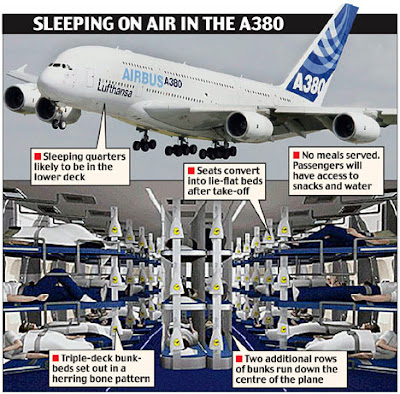 Wow this sure does give one food for thought. Loved it. Great picture of the Air Bus

I had fun writing it.lol

No, not the way I want to travel!

The knowledge of interpreting dreams was given to one of our prophets (Younus) ... It was only given to him, hence the knowledge is lost now. Many dream interpretations these days are fake or guesses

Nabeel : Well lets not say dream interpretation was only given to one prophet. You will run into a lot of problems here.:)

Sandy: They are bulding a plane like this I think and even larger. They also plan on building a ship where you can buy apartments and live on and it will travel from port to port. You will have room to park a car. and live a normal life on it.

I think the future will be man living on the moon or mars and earth will be kept for vacation purposes only, so it can stay beautiful and safe. :)

But this is not in the immediate future of course.:)

This story was about solving your own problem in a dream you find disturbing. Most people wake up but if you let the dream continue, it will resolve itself.:)

AMAZING eye... is that a flowers in it?

Fifi: It sure looks psychadelic lol
Could be a flower. Could be electricity

This is just awesome. The dream segment is seriously creepy!

Mama Zen, yes thats the whole point. When you have a nightmare the first thing you do is wake up and panic and your heart flutters but if you stayed in the dream and saw it through, your brain constantly searches for the answers
you seek. Its like writing a book where you wake up at the climax and never get to read the ending lol

A Lady'sL...Just great post...I enjoyed the dream part....creepy but good

Thanks guys Glad I creeped you out lol
Have another day of soccer.
Love those boys :)