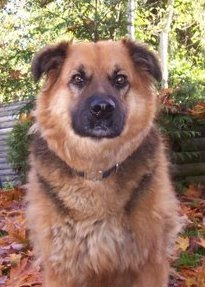 This is my other darling Beau. He came from Quebec.
His Mom was a retriever/boarder collie mix from Alberta. (Intl family)
We have a country place in Quebec and I think Goldie and her boyfriend, must have populated the whole town.
Every dog we saw was either Beau's brother or a sister.lol
Eventually, I believe the boyfriend got run over by a car and Goldie was shot for chasing deer, by the wild game patrol. So ended a beautiful romance.
Nice to know a family's history.
Of course I would never tell Beau what happened to his Moma.
He is scared as it is.

People think pups don't remember but having pups teaches you things.
Goldie had 6 puppies under the shed. Beau was the second one I held after being taken out by my son while we held the protective Mama. He was cute, chubby and curly.

Beau crawled around outside the dog house and Mama ran around and the chain she was tied to probably hurt the little guy. So up until today he will always stand up, even if he's sleeping, if any one walks by or near him. He's got ears that can hear a pin drop.

Well ,one day Beau sat there with half opened blue eyes and with a shaky head, began barking at my son. He'd roll over with each bark so we watched him with interest and laughed.
My eldest son was the only one he paid attention to so I told him, looks like this dog wants you to pay attention to him and chose you to be his owner.

My eldest son's heart weakened. He already chose Daisy, a pure black puppy. Her eyes were barely opened but we already had her almost toilet trained. She hated to be dirty.
So we found Daisy another home and took Beau instead.

We pampered him and he was a smart little guy. You couldn't fool him. He'd find you no matter where you hid, but he was always afraid some one would hit him or hurt him and is such a coward. If you touch his foot to clip his nails, he'll begin howling like his throat was being cut.

He is the most affectionate dog though and will not leave you alone once you sit down, pushing his cold wet nose under your arm for pats. He can be real pesty.lol

Another of Goldie's pups we found half dead one morning, with a wasp eating at it.
It made a huge wound in the tiny baby, which must have been the runt of the litter.

We took it home and nursed it and fed it and brought it to the Mama to nurse and then took it away.
It had a huge piece of torn skin flapping and we didn;t know what to do with it but mama knew. She ripped it off and licked the wound clean and with a bit of antibiotic around it, the hole began to heal real well and the puppy gained strength and just blossomed.

My neighbors took the two last pups which were left and gave them away to a farmer.
My youngest son was heart broken because we worried so much about this particular little rusty short haired runt. He wanted to keep it but I told him he already had Nugget. Nugget is his dog.

The farm was across the street from the grocery store we shopped in, so I decided to stop and ask the lady if we could see the puppy because my little boy was very upset it was given away.
She said sure! She didn't speak English so we spoke French.

My son went inside for about 10 minutes.
When he came out, he was beaming.

He said Mom, he has the same box and a blanky and they feed him with a bottle, with the same baby formula. They do everything just like we did. He'll be fine. :)

I told him so you see, people are nice and they will not hurt the pup.
We explained why we were so upset. It was dying and was being eaten by a wasp and it took a lot to save the little guy.
The woman seemed interested to learn the pups history said not to worry He was going up North where he could run free and have a great life.
Every time we think about him we are so happy for him.
It was a nice ending.:)

Beau, on the other hand, is in a house and although he would love to run free, there are too many dogs and leash laws.
Since then my son got married and moved to Australia and left his poor Beau behind.
Had I known he would do that, I would have found Beau a home because three dogs in the house is insane.lol
Posted by A Lady's Life at 10:39 AM

Beau has a great story! What a handsome dog! 3 dogs, sounds like triple the love :)

Happy Mother's Day! I don't know what your name is or I would make it more personal :)

Three dogs IS a little nuts, but I had three for many years, until my oldest one died this past October.

Thank you for your visits to my tongue-on-cheek Objets D'art! Please also visit my poetry blog Word Garden if you like. :-)