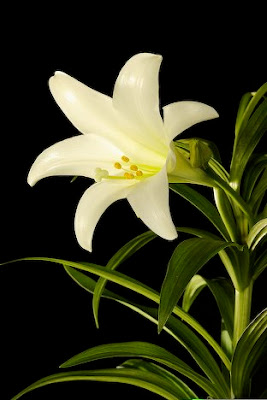 Well the day has finally arrived.

A pretty sombre day commemorating the crusifiction of Jesus, to those of us who celebrate Easter.
It has a special meaning for me regardless of whether or not Jesus was the son of God.
It is irrelevant to me. I choose to believe in him for what he believed and for who he was and for what he represents to this day.

1) He believed he was the son of God.

2) He died believing he was dying for the world's salvation. He wanted his Father, God, to respect his love for people "who do not understand what they do". He asked him for his mercy.and he asked him for hope for a people of his creation.
He lived with people so he understood them better than the Father.

He self sacrificed as a lamb and not as a lion, to earthly powers, without objections, as if he knew this had to be.
This certainly makes Christians different from Muhammads followers.

3) His forgiving of the other two criminals hanging beside him, was also significant, in that if they didn't believe, if he didn't get them to believe in him, then why would they ask forgiveness of another crucified man? What hypnotic spell or trickery, could a mortal, man do on them?

4) and why would there be a storm immediately after his passing?

As a child, I remember the day my Mother pulled me into this little delapidated church, in Montreal, which has since been torn down because they were building a Metro system.
The last thing I wanted to do was stand in church but when we opened the door.....
something undescribable happened. I couldn't explain it as anything else but HOLY.

There was nothing special about that church It was old, smelly and rotting but I wish to this day, they did not tear it down. I don't even remember where it stood exactly but I am sure that whatever is in that spot, is still Holy.

Whenever I had a bad dream, I would wake up with a pounding heart and cross myself, and it immediately took away the horror and replaced it with Peace because I knew then, I had nothing I to fear. I was being looked after.
A very small thing but it kept me safe.

Whenever I drive, I keep a guardian angel icon with me for the road and being on the road so much, I had so many bad things that could have happened to me but for some reason didn't because something always foretold me of danger ahead.
So uncanny and beyond belief and I really need to knock on wood not to jynx myself for telling this story. lol

Once on a highway, we were driving relatively fast. It was around 11pm and we were doing a cross country run. For no reason something told me .....slow down here.
There was no reason to slow down. It was a perfect road, empty, wide. The moon was out so it wasn't very dark.

Anyway, just then this huge Moose ran across the road. His body was higher than the front of my Ford 150 truck. He was looking at me with this yellow eye . I could see his muscles ripple as he ran past, that was how close he was to the truck. Where he came from, I don't know.
I had just enough braking power to slow down, to allow him to pass without hitting him.

I had two kids sleeping in the truck. Had I hit him, we probably would have been a statistic today.
After that night I said to myself ..no more.
No point to risk your life to save a few minutes time.
I never saved time anyway because there was always something forcing me to make a detour away from the main highway.
So time I made in one place, I lost in another.
I found if I stopped at 5pm, had a good nights sleep and then continued the next day at 8 am, I had better timing and less fatigue, than doing it my way. lol

Incidences like this, made me understand that if it is your time, you will not have these impulses to do things you would not otherwise do and then finding that having not done them, would have cost you your life.
I guess every one must get them every now and then but I pay attention when I do.

Another thing I find weird about myself.
I could be anywhere, doing anything and for no apparent reason, by accident, I happen to look into a persons eyes and the person into mine and a thought pops into my head, that this person is going to die.
Its a momentary thing and life goes on. I don't know this person but later on somehow, I find out the person died.
Why was I told this? What was I supposed to do with this info?
Was I meant to stop it? Was I meant to look ridiculously insane by going up to a total stranger and telling him to be careful?

As you walk through life, things happen, which leave you at a loss as to what you have to or need to do.
I know now that if it ever happens to me again, I will tell this person to be careful.
Maybe it will help change destiny. Only God knows how many times mine has been. :)

So with all this in mind I celebrate Good Friday but I look forward more for the ressurection of a man who believed in good ness and love, enough to go through all this for people, so they understand.

I am not a particularly religious person because I have no faith in the people who profess they are working for God. I believe religion should not involve money. It's personal and holy and if you go to pray into God's house, well this world is all God's house.
This planet is a miracle. Life is a miracle. Love is a miracle. Knowledge is a miracle.
Survival is a miracle.
We live miracles every day and we don't even know it.

Have a Blessed day and thanks for listening to my ramblings. lol
Posted by A Lady's Life at 9:03 AM

I love the picture.

I guess I'm gonna have to check some bushes baron hahahahaha