I Must Go Down to the Sea 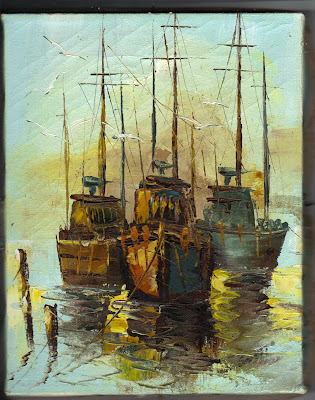 I must go down to the seas again, to the lonely sea and the sky,
And all I ask is a tall ship and a star to steer her by,
And the wheel's kick and the wind's song and the white sail's shaking,
And a grey mist on the sea's face and a grey dawn breaking.

I must go down to the seas again, for the call of the running tide
Is a wild call and a clear call that may not be denied;
And all I ask is a windy day with the white clouds flying,
And the flung spray and the blown spume, and the sea-gulls crying.

I must go down to the seas again, to the vagrant gypsy life,
To the gull's way and the whale's way where the wind's like a whetted knife;
And all I ask is a merry yarn from a laughing fellow-rover,
And quiet sleep and a sweet dream when the long trick's over.

- John Masefield
Guess we need to email Gordon Campbell and ask him how he is safe guarding our land and majestic heritage here in BC.
This documentary is important to watch for all Canadians as well as the world.
Raif Mair
http://saveourrivers.tv/powerplay_player5.html
Petula Clark Kiss me good bye.
http://www.youtube.com/watch?v=P7xBdTYfdDI
Good Morning !!!!
It certainly looks like Monday blues outside. Snow again for many people. That sucks lol
But Monday's child is fair of face so we will get through it like we always do.
Today I have a lox recipe to share made from salmon which, unlike sturgeon, is readily available in most grocery stores. Its so easy and great with phili, pepper and bagels.
I also included a chart showing which fish have the least amount of mercury.
I love tuna but never buy it now because of the mercury levels they say are in it.
Good news for this fish if they fish less for it now.
One Beluga in the St Lawrence has enough toxins in it, to kill 50 men.
People are not fish. We can't tolerate as much as a Beluga.
Cooking is an art and I am not that great of a cook. You need to love cooking to be great at it.
I am more like Nigel and Sally.Nigel bragged to Sally:
The two things I cook best are meatloaf and apple pie. he said.
Which is this? Sally answered. lol
But lox is easy for any one to make.
Selecting your Fish 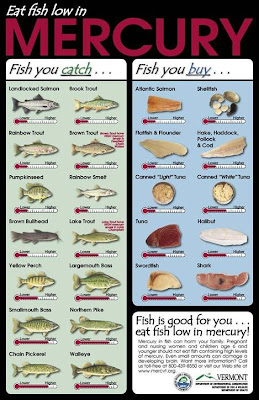 Ingredients:
2 filets, weighing about 2 pounds 3 Tbsp coarse sea salt or kosher salt
For the Sauce:
1 cup whipping cream A good bunch (1/2-cup) of herbs — dill, chervil, or chives, or a mixture of these — finely chopped Salt and pepper

Carefully remove any small bones from the filets (tweezers will help). Sprinkle the filets with the salt, on the skin side as well as inside (the salt must be coarse, not fine, so that it draws out the moisture; fine salt is absorbed and results in too salty fish), and put them together to reform the fish. Cover with plastic wrap and leave in the refrigerator for 12 hours, turning the salmon over when juices start to collect.
Before serving, scrape off the salt and wipe with a paper towel, then rinse in cold water. Taste a piece. If it is too salty, the saltiness can be removed by soaking in fresh water for as long as necessary. Cut thin slices at an angle.

To make the sauce, whip the cream and add the herbs and salt and pepper.

A different way to catch fish.
Maybe we should try?

1830 Mormon Church founded in the US

Petula Clark. LOVE ,THIS IS MY SONG

Have a good one every one!!!