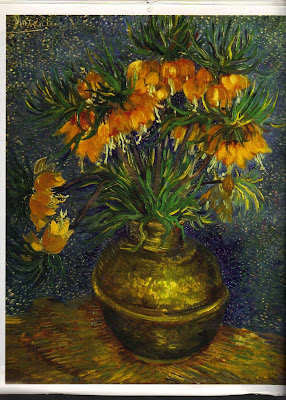 One more day and every one will be doing the Friday dance loll
The week went by quite quickly and I still wish it was day and day and day. Loll

I began knitting a new throw yesterday. Couldn’t resist.
All the ladies are showing off their beautiful artwork and
Quilts and I got the itch again.

I already made about 5 king sized bed spreads out of sheep wool and alpaca.
The alpaca was a bit rougher, heavier but it's sooo warm.
My guys love them because they say the holes let air in and the wool keeps the heat in,
so they keep telling me to make more of them.
They are good projects to do in the car if your’re a soccer Mom like I am .
Quite expensive though but affordable if you buy the thread a bit each week.

This throw will be smaller. I am using baby blue, bright yellow, and a bright green in wool colors.
I guess I will crochet a white edging all around, just to give it a clean look.

I thought would be great for kids and Easter and now made work for myself.
My other art work is standing in a room waiting to be finished.
I always say a picture is never finished.
It’s a lifelong project.
But I will.

Knitting is done in front of the TV set and of course the news .
Afghanistan passed new (old) laws for women which got me a bit perturbed.

Our soldiers are helping a regime that still enslaves women and I concluded if that’s the case, we are not helping anything change, so we should bring our soldiers back home.
War is bad but if you are going to fight, then do the job and get out.
Prolonging suffering doesn't help anyone.
Doesn't help people forget and move on.

In Russia, when soldiers were told to go against the people, the women went to each one and said, I am your Mother. You want to kill me???
The realization of what they were doing, hit them in the heart and they immediately changed sides but with these Taliban…
who knows what is in their heads if they consider their Mothers to be nothing more than cattle.
The law says they are.
So sad.

So then I thought I'd look up some good things in archives and see what happened on the second of April.
Except for Charlie Chaplin coming back to the US in 1972 , the rest seemed to be quite gloomy.

So then I switched and figured well yesterday was fun.

Every day should have some fun in it and sure enough, The Hour told us a story about Obama and the Queen.

Obama went to England and gave the Queen a present.

An ipod. Loll
Now that was funny .
That’s something my son would do loll

St Peter and the three friends.

Three men were waiting at Heaven's Gate. St. Peter says, "OK, guys, have fun,
but whatever you do, never lie, or you will spend the rest of eternity
with the ugliest women in the universe."

So, here they were, two guys are walking around with their monsters of women, when
Suddenly, they see their third friend walking with the hottest woman ever conceived by man.

They couldn't believe it.
They asked him: "How did you land with that babe, when we get stuck with these nasty women?"

The third guy nudged his girl and says, "Tell them."

Wow! I love the painting!Sure do wish I had a little talent in that area but the good Lork didn't see fit for that too!
I really laughed at the Calvin and Hobbs cartoon. thanks for sharing--just goes to prove that life is a cycle. I just read the Queen joke to my hubby and hit the punchline as he was taking a drink of soda... I do look lovely in brown spotted t-shirts!
The afghan sounds lovely, can you share or explain what the pattern looks like? Currently one of my UFOs (unlisted) is putting the final crocheted picots on a knitted ripple afghan--I've never done a ripple before in crochet or knit so it was an adventure (especially when I didn't have a pattern).

Hi.
Welcome to a Ladys Life
The painting is a Van Gogh I like to get back to old things.
Old is good. lol

I will scan the Creative Knitting Magazine and show it to you.
Ya I laughed at the Queen one You can just picture it all lol

Hope you are not too spotty lol
:)

Well, for the first joke, it could be that it lead G. W. Bush to the second ?