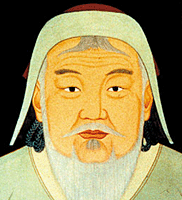 ’s Ghengis Khan of the 12th-13th Centuries is now renown for spreading Democracy.

In 1990 held a multi party election and by 1992 obtained itself a constitution.

According to history, Ghengis Khan promoted participatory government, rule by law, equality under the law,

and basic personal and human freedoms.

Portraits of Genghis Khan are common in today.
Posted by A Lady's Life at 2:25 PM

More information I woyuldn't have if I didn't blog. Thank you.

Welcome. They had a lot written on him but it is surprising a man such as him would be given credit for democracy.
Live and learn lol

Thanks for the cute story between Tatty and Rotty, lol ! My first cat was the terror for all dogs in the neighborhood ! She ran behind all dogs and the dogs were so surprised usually they ran behind a cat.