Are Women Superior to Men....? 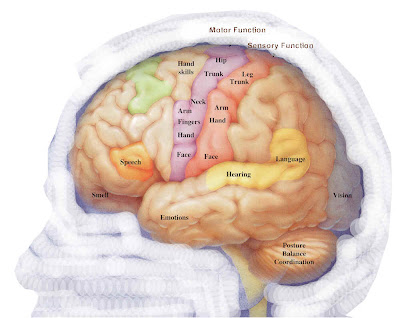 What kind of brain do you have? There really are big differences between the male and female brain, says Simon Baron-Cohen, director of the Autism Research Centre, Cambridge University.

In his new book, the Essential Difference: Men, Women and the Extreme Male Brain (published by Penguin) Baron-Cohen shows that, indisputably, on average male and female minds are of a slightly different character. Men tend to be better at analysing systems (better systemisers), while women tend to be better at reading the emotions of other people (better empathisers).

Baron-Cohen shows that this distinction arises from biology, not culture.

Cell numbers: men have 4% more brain cells than women, and about 100 grams more of brain tissue. Many women have asked me why men need more brain tissue in order to get the same things done.
Cellular connections: even though a man seems to have more brain cells, it is reported that women have more dendritic connections between brain cells.
Corpus collosum size: it is reported that a woman's brain has a larger corpus collusum, which means women can transfer data between the right and left hemisphere faster than men. Men tend to be more left brained, while women have greater access to both sides.
Language: for men, language is most often just in the dominant hemisphere (usually the left side), but a larger number of women seem to be able to use both sides for language. This gives them a distinct advantage. If a woman has a stroke in the left front side of the brain, she may still retain some language from the right front side. Men who have the same left sided damage are less likely to recover as fully.
Limbic size: bonding/nesting instincts - current research has demonstrated that females, on average, have a larger deep limbic system than males. This gives females several advantages and disadvantages. Due to the larger deep limbic brain women are more in touch with their feelings, they are generally better able to express their feelings than men. They have an increased ability to bond and be connected to others (which is why women are the primary caretakers for children - there is no society on earth where men are primary caretakers for children). Females have a more acute sense of smell, which is likely to have developed from an evolutionary need for the mother to recognize her young. Having a larger deep limbic system leaves a female somewhat more susceptible to depression, especially at times of significant hormonal changes such as the onset of puberty, before menses, after the birth of a child and at menopause. Women attempt suicide three times more than men. Yet, men kill themselves three times more than women, in part, because they use more violent means of killing themselves (women tend to use overdoses with pills while men tend to either shoot or hang themselves) and men are generally less connected to others than are women. Disconnection from others increases the risk of completed suicides.
Posted by A Lady's Life at 6:29 PM

I've often subscribed to the notion that males and females are hardwired to "think" differently. I truly have poor spatial and analytical skills, but my husband does quite well with these. Interesting to see how many other traits are mentioned here too. Nice work!

What a very, very interesting set of facts. Thank you so much for giving me something to think about. Especially the "disconnection" from others. One of my sisters feel as though no one includes her in anything, she is always changing jobs and mismanaging money and I get worried that she may try something to harm herself. I often feeled "Stressed and over worried" because I can't help her in the ways that she needs it. I often tell her that I love her and try to reassure her that the entire family loves her, but I think she is one of those humans who needs "constance" assurance and everyone is going in many different directions which leaves her feeling ignored...

If what you are talking about is extreme mood swings, she may be bi polar Her doctor could help her with this. Margaret Trudeau, our Prime Ministers Wife, has this and she is very much involved helping people with this problem.
Half the battle is in knowing what you have. I send her my blessings.

Lady's Life....Women are superior, from what I see in your posts...you are certainly a cut above us poor man
JDS

you are so funny JDS.lol
I doubt that for a moment.
Women do what women do and men do what men do. Opposites attract If we were all the same, life wouldn't be so much fun lol

Whether a man's brain is really larger or not, a woman knows to tell him it is, regardless. We catch more bees with honey. ;-)