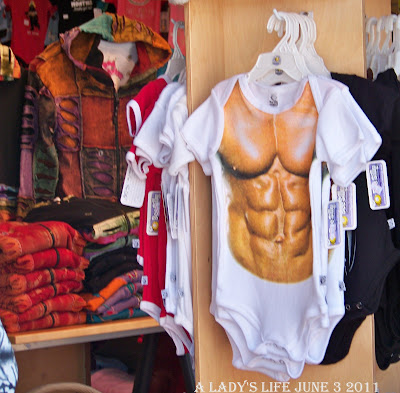 Steveston has lots of boutiques as well as great sea food restaurants.
I was going to buy this shirt for my husband so he could show off his abs.lol
It would at least get a second look from gals and build up his ego a bit.
I know, however, when they see a gal like me walking beside him, they'll think twice before messing with me. lol
That skinny old guy is MINE Ladies.lol
SORRY! :)

+==============
Well the Vancouver Canucks got a thrashing yesterday by the Boston Bruins.
Everything began very well until Bostons' Horton almost got his neck broken by a shoulder hit from Canuck defenseman Rome.
Seems this affected the managers and then the team as things began to go sour for us.
So many fights ensued between the two team members that by the time it was all over we hardly had anyone left to play in the rink lol
Our Stadium was sold out in spite of the fact that the game was in Boston and even in Boston,
there we 14,000 Canuck fans cheering for us.

AGAIN
Sincere Condolences to my fellow Blogger George
on the passing of his Sweet Mother.
May she Rest in Peace in Gods' Everlasting Glory.
We shall all meet again.
------------

I am sorry about George's mother's passing.


That is a fun shirt.

Thanks Sandy . I am sure George will be touched. :)