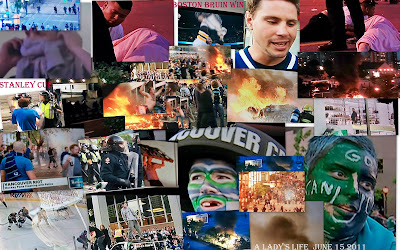 Boston Wins the Stanley Cup and Brings the Cup Home to the USA!!!
Congratulations Bruins!!
Most of Vancouver was sad our Cunucks lost and then there were some who were angrier than others or just taking the opportunity to have themselves a very good time.
This is going to cost Vancouver plenty and the people are not very happy.
The fans turned over trucks and police cars and set them on fire.
They looted stores and hit some Bruin Fans who lay bloody on the ground.
There were knifings, and when the riot police began to throw tear gas, many ended up at St Pauls Hospital who had no more space and began refusing patients.
The buses were stopped, streets and city bridges were closed and only the sky train was able to take people home.
Most left quietly but those who remained will probably be all arrested for the damage they caused.
I personally saw a Cunuck loss.
The games were affected by the NHL Presidents Speech, which expressed the need for a US win because of all the money the US put in.

Well I am glad the US made money but we lost money. Everything we made is going to have to pay for the damages incurred by just plain foolishness, inclusive of bad publicity.
So we thank the NHL President for this.
His was an invitation for the refs to ignore rules in favor of the Boston Bruins.
Our Cunucks took beating after beating till nothing was left to play in the final game, while the Bruins came on fresh and with their good goalie, they managed an easy win.
The East was happy because they knew Boston had many Canadian players and the Cunucks also had US players so some one in each country, had a player who felt good with the win.
Boston was very quiet and happy. Maybe they will party when the team gets home.
This morning they arrived and no one was as exuberant as Chara carrying the cup.

So the day ended with excitement but not the positive excitement we wanted to have in Vancouver.
We Love Our Cunucks!!!
We will Continue to love OUR CUNUCKS!!

May they have a well deserved rest and take time to lick their wounds, of which they have many.
Till the next game Boys!!
A NEW BEGINNING
You never lose till you give up
This drinks' for you!!!
CHEERS!
Thanks for the great games
and
Sleep Well.
:)
Posted by A Lady's Life at 11:42 PM

I heard on the news that it wasn't actually fans doing the rioting. I hope that's true.

What a mess, that riot! I feel bad things went as they did. Puts a bad spin on a good sport.

I blame the NHL President.
He's turned this game into a fraudulent blood sport with very bad reffing.People pay big bucks to see clean games and the Boston series wasn't one of them.
Vancouver was the better team and I am not saying this because I am from Vancouver. I am a Montreal Fan lol One of our guys career was destroyed by The Bruins' Captain.So for him to run around with the cup is a disgrace to us.
My son is a soccer player and a Cunuck fan and this really made him think and learn something.
I also blame the BC government. We go overboard for the Chinese and East Indians, Gays and what have you and our own people have nothing. No jobs.No justice.No religion.No respect. No marriage. We have nothing to believe in.The kids are confused.
The reporters are not telling the world the truth. If you want a judge or a sheriff, there are none and even then they take the side of the crooks because of human rights.
No wonder the youth is angry. I have been writing the papers a long time about this but no one cares. They just keep selling the country out to foreigners and we being laughed at and becoming the new India and Africa where people just come to take.House prices are rising because people are being defrauded out of their houses. It's not just in America guys. Lots of bad things going on here and these kids are telling the story.The media refuses to hear it. This is why such a big to do is being made by media, to hide the truth.
Sorry Vancouver. I love BC but....
I can't believe what is going on here and how people live here.Its a night mare.
It isn't right. The kids destroyed the city and pretty soon its going to get worse.The message they are sending is ....Don't move here.
Come visit, enjoy, love our animals,
love our nature but don't mess with us.We are Canadian. Be Canadian or get out.

My son went down town to see for himself what was going on and he came home and told us it was unbelievable what they were doing.
He took pictures but we already saw on the news.
Another sad day when we needed a bit of joy.

Sandy - I know people spent so much money to see a clean game which was needed to feed their families.
To think the games were being tampered with because of the NHL President, just puts in all on the line bordering evil.
Nothing is right anymore about playing these games. I wasn't a hockey fan to begin with but now I am even less so. I remember as a kid I used to watch them play and it was so violent. I said thanks but no thanks. Today they should have toned it down and turned it into a civilized respectable game.
But I guess with greed being the prime incentive to play them,Hockey will continue to be a blood sport.
They pay the big bucks to watch people die.

Mama Zen - They called these kids anarchists lol
They were not anarchists.
They were depressed kids who saw an opportunity to let out some steam.
That's all it was.
One girl went on TV and told a reporter I just stole this purse. He asked her why and she said because she liked it.
And why is it wrong? The windows were broken and the store was looted.
I remember communists on Dr Zhivago enter his home and take it all over.Thats what they did in those times. If you had things, you were seen as a criminal.Things belonged to the people.
What's yours is mine is the communist philosophy. lol
This is all a sign and has to be recognized as such.

Thanks for your comment. Istanbul is a safe city, we can walk alone everywhere only bothered by helpful and friendly people. Even in the poor areas you feel safe.
Today we are doing our first sightseeing with a guide !

Gattina = today no where is safe.
Its a false sense of security we all have.
We felt safe in Singapore, Indonesia and Malasia as well.
We were lucky and we'll leave it at that.