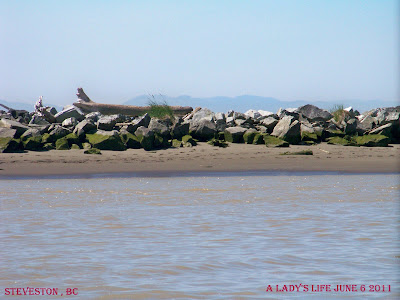 Whenever I look at it, this is the song that Pops into my head.

The river is laden heavy with brown sediment which is pushed down into Delta by rapids from the interior, into the Pacific Ocean.
During salmon spawning season, one could stand on the shores and see tons of fish jumping out of the water on their journey to the interior where they were born.Alexander McKenzie discovered the Fraser when he paddled the Peace River with his Voyageurs to Prince George.
From there he paddled to Quesnel.
Simon Fraser later followed his route but then took detours into what was called by the natives as bad water (rapids).
The natives constructed vines ropes and ladders to cross the bad spots as did Simon Fraser along the cliffs to pull their boats.
Fraser thought he was on the Columbia River but found out he wasn't when he reached Hope.
From there they paddled through hostile Indian country into the Gulf of Georgia.
This part of history is interesting because of the Hudson's Bay Company.
James Douglas worked as an assistant to The Hudson Bays' ,John McLoughlin.
He built Fort Victoria in 1843 on the 49th parallel. Then gold was discovered on the Fraser and all these Americans came north for the gold rush, in 1859.
Douglas got himself Matthew Baillie Begbie, who quickly got himself a reputation as being the hanging judge, to keep order.
Joseph Trutch became BC's first Lieutenant Governor, under Queen Victoria, and under him, the Alexander Bridge was built, to cross the Fraser.

And this is how the west, was slowly won. lol
The picture above is a little beachy island.
On the outer side is the Fraser and on the inner side we see here, is also the Fraser but in a sorta Marina setting of Steveston, where fishing and tour boats come to service the locals and tourists.

Hi Lady! With the long weekend here in Lisbon (four days off...), I finally manage to stroll around Blogosphere... And what a fabulous surprise: Paul Robeson and his fantastic voice!! Long time I didn't hear him... Thanks!!


Blogtrotter Two is visiting some beautiful villages... Enjoy and have a splendid weekend!!

Thanks Trotter. Will visit :)