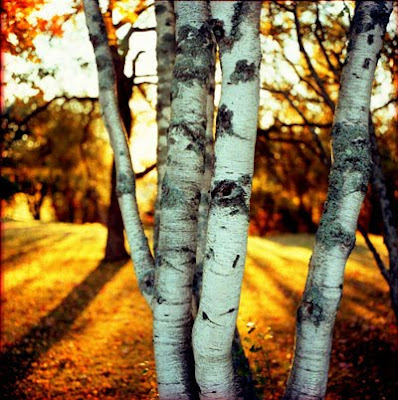 I spent my week end continuing making hats and scarves.
I have 6 sets and all different. Can't get myself to pick up a camera though
to make a collage Maybe later. lol
My son gets 2 in the green color cause those are his school colors.
I have one green scarf left to make for him
Now I have to go to the dollar store and see if I can get those dollar gloves to include in the sets.
They are very nice and hardly worth making for that price although my son would like those
fingerless wrist warmers and those all you need is to buy woolen tube socks and cut off the feet part. The feet part can be sewed up and crocheted around to make nice slippers and the top is ready to wear without much fuss. On the soccer field it will be cold and every little bit helps.

Other than that I love Birch Trees. I can't get over that they can be used to write on and when I was a kid people would go into birch areas to pick wild mushrooms. Those were the days.

My Dad and I would go very early in the morning and bring back 2 x 50 pound potato bags full.
Then the rest of the morning would be spent sorting cleaning, cooking and canning. It had to be done fast before the mushrooms spoiled.
This my Mom was great at. Canning was her specialty. We would have tons of pickled mushrooms for winter and they were good. Sometimes we'd eat them out of the jar and sometimes we'd fry them with eggs or onions with sour creme. They made for a lovely condiment.

These are days when I really miss my parents. They did so many crazy things lol
and I remember every day so vividly like they happened yesterday. There is nothing nicer than working like a family team. Today we don't have families like this anymore.
Reminds me of the Waltons.
Well, here's a few puns.
I found one yesterday on CNN : Police shoot dead dog for biting.lol

1. The fattest knight at King Arthur's round table was Sir Cumference. He acquired his size from too much pi.

2. I thought I saw an eye doctor on an Alaskan island, but it turned out to be an optical .

3. She was only a whiskey maker, but he loved her still.

4. A rubber band pistol was confiscated from algebra class, because it was a weapon of math disruption.

5. No matter how much you push the envelope, it'll still be stationery.

6. A dog gave birth to puppies near the road and was cited for littering.

7. A grenade thrown into a kitchen in would result in Linoleum Blownapart.

9. A hole has been found in the nudist camp wall.. The police are looking into it.

11. Atheism is a non-prophet organization.

12. Two hats were hanging on a hat rack in the hallway. One hat said to the other: 'You stay here; I'll go on a head.'

13. I wondered why the baseball kept getting bigger. Then it hit me.

15. The midget fortune-teller who escaped from prison was a small medium at large.

16. The soldier who survived mustard gas and pepper spray is now a seasoned veteran.

18. In a democracy it's your vote that counts. In feudalism it's your count that votes.

19. When cannibals ate a missionary, they got a taste of religion.

21. A vulture boards an airplane, carrying two dead raccoons. The stewardess looks at him and says, 'I'm sorry, sir, only one carrion allowed per passenger.'

22.Two fish swim into a concrete wall. One turns to the other and says 'Dam!'

23. Two Eskimos sitting in a kayak were chilly, so they lit a fire in the craft. Unsurprisingly it sank, proving once again that you can't have your kayak and heat it too.

24. Two hydrogen atoms meet. One says, 'I've lost my electron.' The other says 'Are you sure?' The first replies, 'Yes, I'm positive.'

25. Did you hear about the Buddhist who refused Novocain during a root canal? His goal: transcend dental medication.

26. There was the person who sent ten puns to friends, with the hope that at least one of the puns would make them laugh. No pun in ten did.

no pun intended? but there are 26! and some are hysterical :)

I enjoyed your puns a great deal -- most of them were new to me.
Thanks for sharing those memories of mushroom picking with your Dad. It sounds as if you had some great times.

You have been very busy! You have many talents. Sweet thoughts about your parents, too. You are a good person.

Thanks for the puns.

I loved reading about your parents and your childhood. Such great memories!

Thanks guys for all the lovely comments :)