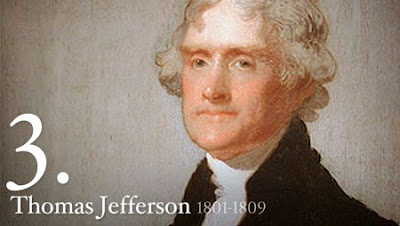 Snopes on the Thomas Jefferson Koran seems to be true.

What an interesting story.

WHEN KEITH Ellison was sworn into office as a congressman, he wanted to swear on a Quran instead of a Bible, so they used Thomas Jefferson's Quran, which they borrowed for the occasion from the Library of Congress. The story behind 's Quran, and what he did with it, is an instructive look at the power of accurate knowledge.

It began before was president. He was then the American ambassador to , and he was disturbed by what was happening in the . For centuries, the "Barbary Coast Pirates" had been raiding ships passing through the . These were not "pirates" in the sense that we usually think of them. They weren't rogue agents acting independently. They worked for the governments of the North African countries. They would steal the ship and return to their countries, confiscating the booty aboard the ship, most of which added to the wealth of the Islamic state. They also took the ship's crew members captive and ransomed the ones they could. Most of that money also went to the Islamic government. The crew who could not be ransomed were sold into slavery.

In addition, these "pirates" randomly raided towns on the coasts of Europe and captured people, bringing them back to to ransom or sell into slavery. They even came so far as the shores of to capture settlers, to bring them back to to ransom or sell. They especially prized young women and children who could be used as concubines or made into eunuchs. Over a million Europeans and Americans were sold into slavery during the 200-year reign of the Muslim "" rulers.

Many European countries wanted this to stop, of course, to which the leaders of the North African countries replied, "All you have to do is pay us a certain amount of money annually, and we will not attack ships from your country." Many European countries paid the tribute. It was cheaper than going to war. Of course, that was a short-term, self-defeating solution, since paying the tribute made the North African Muslim countries more powerful and more capable of terror, plunder, and mayhem.

The was paying this tribute also. This bothered . It just so happened that while he was an ambassador in France, Jefferson met with John Adams (then the American ambassador to Britain) and together the two men met with the ambassador from Tripoli (one of the North African Muslim pirate countries). Jefferson and Adams sat down to talk with this man. They asked him why attacked ships. Why attack the ? They had no previous interactions. Why the hostility? Why did they choose as an enemy?

The Tripoli Muslim ambassador was very straightforward. He said, basically, "That's what we do. We are commanded to do so by Allah." Jefferson later wrote that the ambassador told him, "It was written in their Koran that all nations which had not acknowledged the Prophet were sinners, whom it was the right and duty of the faithful to plunder and enslave; and that every mussulman (Muslim) who was slain in this warfare was sure to go to ."

Completely taken aback by this revelation, decided to look into the matter further, and did the one thing everyone should do: He read the Quran. He learned what Islam was about.

And when he became president, he formed the United States Navy, created the Marine Corps, sent them to the shores of , and soundly defeated the Muslim warriors. This brought an end to the "Barbary Coast Pirates." This was the first foreign war fought by the and military aggressiveness of Islamic countries remained contained and weakened for over a century.

It's amazing what a little accurate information can do.

Thanks for the information about Jefferson's Quran. More of us need accurate information.

George - We still have pirates out there doing the same thing, to this day.Whose to say what religion they are?

This is very interesting, indeed. However, islam never teaches to fight or attack those who are in peace with u. Some historical information are sadly biased to serve in deforming the image of some ppl, exactly like the modern media and its war against Islam. I just wanted to clarify this point... :)

Hind - Thanks :) This is what all muslims say except the ones who speak the truth. They tell a different story.I believe them because I've been to that part of the world and seen for myself.

We have seen people having their heads chopped off, women stoned for adultery and kept uneducated and 12 year old children are married off crying, to old men , sold for money.

They go all the way to Thailand to buy them and they sit watching sex acts in private rooms in places like Patpong.
Not very religious.

Once you join the Islamic faith, you cannot leave.They will not feed you unless you join their faith.People are kept poor and angry. Even Arafat stole from his people and died a rich man while his people starved.
It's a very different interpretation of peace than what we are used to.

You look at the hikers being kept in Iran for making a mistake. The woman was let go because she was sick and even in jail, she was not allowed to wear her own clothes.

Another American woman soldier was threatened to have her hands and feet cut off for wearing shorts.

I myself began to worry when I got off a plane to walk to see an islamic airport.

There was nothing there except walls and ceramic tiles and a hole in the floor for a toilet.Yet the soldiers were standing with guns and cigarettes, unshaven and they presented a physical threat to European women. Especially if they were blond.

In our world, we are allowed to investigate and ask questions about religion, In the Islamic world no one is allowed to discuss Muhammad.
Secrets are kept because to disclose them, would mean people would leave the faith or rebel against it.
Its another world and I have to say
I didn't like it much.But these were my experiences and this is my opinion.
On a lighter side,I like the food and most people I meet here in Canada are nice.
:)