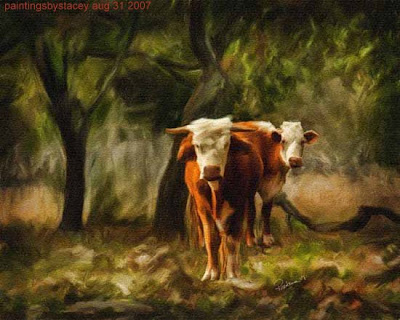 
For those of you who have never traveled to the west, or southwest, cattle guards are horizontal steel rails placed at fence openings, in dug-out places in the roads adjacent to highways (sometimes across highways), to prevent cattle from crossing over that area. For some reason the cattle will not step on the "guards," probably because they fear getting their feet caught between the rails.
A few months ago, President Obama received and was reading a report that there were over 100,000 cattle guards in Colorado . The Colorado ranchers had protested his proposed changes in grazing policies, so he ordered the Secretary of the Interior to fire half of the “cattle” guards immediately!
Before the Secretary of the Interior could respond and presumably try to straighten President Obama out on the matter, Vice-President Joe Biden, intervened with a request that...before any “cattle” guards were fired, they be given six months of retraining for Arizona border guards. 'Times are hard', said Joe Biden, 'it's only fair to the cattle guards and their families!'

Ya hum lol Guess they don't watch TV lol There's nothing to it.

That has to be a joke.

(I read somewhere that they are referred to as "Texas gates" in some countries.)

Jen - Of course it is lol

I'm afraid that city slickers might not know what cattle guards are. Those of us who live in the country are very familiar with them.

Supreme Court Justice, Stephen Breyer,
Making Our Democracy Work -
Discussed how people do not know how or why or where the laws of the land came from and yet they vote and make demands without knowing the consequences of the changes they are proposing .
I think his book is well worth reading.

George - so true.
this is why this story follows many presidents. lol
Its a joke implying even Presidents do not know what they are.
so people discuss things not knowing what they are talking about lol, and make decisions from their discussions.
Like Bushes Weapons of mass destruction in Iraq.

I do believe they had something which the US sold them before and this is why the US went in. But the stuff must be buried and the people who know where, might all be dead.