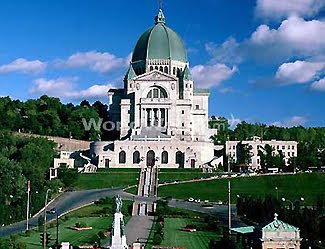 St Josephs Oratory is one of Montreal's finest Catholic landmarks on Mount Royal.
Mount Royal is a dead volcano.

It began as a chapel to honor St Joseph, Jesus's step father.
The Church then began to grow in size with Brother Andre who is said to have performed miracles curing the blind and the crippled.

Pope John Paul 2 beautified him and now his heart lies in state as a symbol of protection .
The rest of his body is also in another part of the church.

The Church has a very large organ inside .
238 steps lead up to it and pilgrims would come and pray on each step as they mounted on their knees to the very top.
It was a sight to see as they began at the very bottom.

Across the street was a wax museum. So when you went there, you visited both places.
It sure left a lasting impression on me as a kid.

I sure would love to see this place again.
Wonder if anything changed?

This is a very impressive church. I didn't realize Mount Royal in Montreal was a dead volcano.

George: Mount Royal is a beautiful mountain Especially in the fall.
It has a HUGE Cross on top one can see for miles and the famous man made Beaver Lake (shaped like a beaver) The RCMP used to have horses up there and the mountain had gazebos where in summer they would have musicians perform.They also have a place to park with special lenses to view the island.
Its a great place for walks.
I used to know a gentleman whose Gramma owned 1/2 the mountain but then had to sell because of taxes.He siad he used to ride everywhere on his horse there.
Interesting how times change. If that lady would ever wake up she would not know her place.