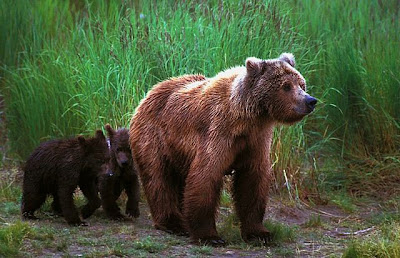 This story reminds me of when one of my cats found a nice place to sit inside the car engine and travelled a fair distance.
Luckily it did not get hurt either.

WINNIPEG — A curious young black bear became an unlikely stowaway after getting stuck in a train this week and being carried on a 12-hour trip to Winnipeg.

Staff at the CP Rail yards in Winnipeg were doing an inspection late Sunday night when they noticed a black object under a train.

It turned out to be a bear cub with its head stuck in a 10-to-12-centimetre hole at the bottom of the train, behind the wheels and above the braking system, said Manitoba Conservation natural resource officer Blake Patterson. The bear's body was supported by part of the train's frame, as well as brake lines and cables.

There wasn't pressure on the animal's head, said Patterson, it just couldn't get itself free.

Officials believe the cub became an accidental passenger in the Manitoba town of Foxwarren near the Saskatchewan border and was stuck as the train rolled east to Winnipeg.

Conservation workers came first thing Monday morning and tranquillized the bear. It was kept in a live trap for another 24 hours so the drugs could wear off, which Patterson said took longer than normal.

"We gave her a little extra time, because she was still very tired, from probably the stress of the whole situation," he said.

The bear was released into the Agassiz Provincial Forest on Tuesday.

Read more: http://www.montrealgazette.com/technology/story.html?id=3564731#ixzz10NPUnDwp
Posted by A Lady's Life at 10:54 AM

Mama Zen= these bears are so cute. Its too bad we can't get them operated on so the kill zone disappears and they become docile pets.
Maybe if we grew them to be smaller like they did with the mini horse, they would be easier to live with.
Come to think of it they could do this with pit bulls and resolve the attack problem as well.
So why don't they do this then?
We are taking away their land.

Poor little bear and your little kitty too. So glad both were unharmed. Happy Fall to you! :)

Thanks for visiting Lisa.
Wish all the worlds problems were as simple as these ones.
:)

Yes it had a happy ending Akelamalu :)