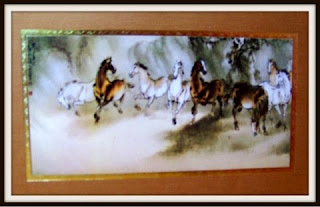 This Chinese dipiction of horses is gorgeous.
I love it hanging in my house.
Day was sunny and not too chilly.
Made rack of lamb and boiled salmon, the soup of which
I poured over rice and string beans .It was delicious.

But he who unites himself with the Lord is one with him in spirit.
Flee from sexual immorality.
All other sins a man commits are outside his body, but he who sins sexually sins against his own body.

Do you not know that your body is a temple of the Holy Spirit, who is in you, whom you have received from God? You are not your own; you were bought at a price.
Therefore honor God with your body.

People ask: Why do priests stay celibate? Any one who understands religion understands that life as a grown up, consists consists of moral responsibility towards yourself, your family and the society you live in.
They are no longer children and must put their toys away to set an example for others to follow. The Queen of England gave her pledge to do this at a great cost to herself. This is why she gets the respect she earned and deserves today. She is someone to look up to.
The Pope is another such example and Mother Teresa. These people understand that they are united with God in body mind and spirit.
If the body is abused then so is the mind and the spirit. If the spirit is corrupted, then it cannot perform the job it was there to do. If the body is disrespected then so is the mind and spirit. When people decide to marry, they unite/bond their two bodies, minds and spirits into one unit. If one disrespects or abuses their body, then this affects the other and also everything they do together as a unit.
It disrespects the children because you cannot set a good example for them to follow and this then goes into society and schools and affects other families. It is like a disease that cannot be stopped.

Then the evil steps in and tells you this is normal. Hey, life is supposed to be about fun.
Is disease normal?
Is disease fun?
Ask anyone and the answer they will give you is that they understand that it is not.

In society we have things like religion, the priesthood, marriages and families, so that we can have some form of control over people, so they do not lose their way.
Together every one can have good clean fun, without hurting the body mind and spirit. Each one becomes an institution and if corrupted,then the other parts will have a problem keeping people from losing their way.

Ok we do have governments, laws courts and judges, but they are only as good as the people who they employ. If they are lost people, then they cannot set the examples people need to see growing up and people do need to see this example, or they get lost.

A movie comes to mind: Blast from the Past.
It stars Brendan Frazer and Alicia Silverstone Christopher Walken and Sissy Spacek. It's about this family that lived underground in a shelter to save themselves from the nuclear holocaust when the Cuban Missile Crises began. It didn't take place so they did it for nothing.

They raised a young man who was such a delight. He was every girls dream come true in a man. Smart, polite, ethical, moral, untouched by a world full of society's problems. He did not know pain and suffering, unkindness. His parents were there to teach him and explain the world to him as much as they could.

Now if the world did not like innocent people, no one would have been attracted to this young man. Today it is very hard to find people like this and so if one does find a person like this, they want him/her. This should show the world something. It should show that ethics morals and values are desired things. People raised with them are pure and delightful. They are kind and God fearing. Society makes them our heroes today for doing the right thing because we do not have enough people who do.
When your body is a temple, so is the mind and the spirit. Corrupt one...and you corrupt all and become someone you don't even know.
You become someone living for fads instead of someone living to set an example for the world to follow. People who live to set examples, live what is called a life of wisdom and maturity because they know they have something good to offer.
Something money cannot buy.
It is not an easy life.
xoxoxoxoxoxo
Posted by A Lady's Life at 9:28 PM

I really like that Chinese painting as well. Thanks for posting another very thoughtful article.

Welcome George and thanks