When the World Stands Still. 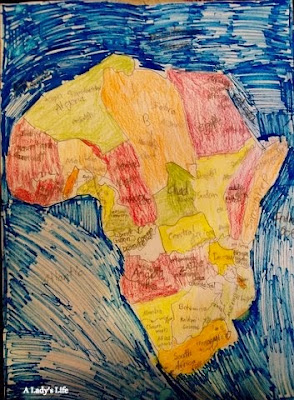 James left and the world stood still again.
I got out the canvas and began sketching things to paint outside,
in the world I loved. I remembered the nurses working in geriatrics
and how much a painting of snow and mountains appealed to them.
Rooms full of such paintings certainly inspired people to get well.

With technology going rampant however, people don't sit and
waste time with philosophy or dreams about life.
Times have changed.  People have changed
and those who havent well,.. they struggle along as best they can.
Much is lost in the process.
Much is gained but those who gain, sit in a violent world with
so much pain and suffering around them.
As much as we want to  see it all go away, the problem just keeps
getting larger and people still keep dying.
We wonder why and we don't understand.
Nothing stands on a rotten foundation, so it must be all torn down and
people have to begin again and again  and again till they get it right.
After a while,
I decided to make some chiacchieres  since I had lots of staples.
All they needed was 1 lb flour 1 1/2 oz confectioners sugar, 2 eggs,
1 1/2 oz butter 1/2 cup milk 1 pinch salt 1/8 oz baking soda, vanilla
and frying oil
You mix all the ingredients into a dough, let sit 15 min then cut out in diamonds or make little bows by putting a slit in the middle and pulling through one end. Then you fry and sift some confectioners sugar over each piece.
I just finished when I saw ol Burt pulling his mule Jesse.
Eh there! How r you? What a surprise?
Need any help?

I'm fine. I'm fine. he growled coughing to clear his throat.
Saw your smoke and thought you'd be home.
You'd be right there but sometimes I see my smoke and know
I'm not home. I laughed.
Well gatta xpect that girly being so far inside these woods
but company's nice once in a while.
Sure is Burt. Good company though.
Come sit here a while.You're just in time.
I made some cookies.
I got Burt some stew and bread.
He began eating and thanked God it wasn't squirrel or some other local critter.
See you got some pelts.
Ya ...ya. Gotta eat something so the pelts get left behind.
Makes for good sewin for winter.
You gonna spend the winter up in the hills again?

Nah. Never do.
Saw a helicopter flying around back yonder though
Back yonder where?
Oh by the foot of Bear.
Bear?  That's funny. Was it a small one?

Hmmmm I wonder why they are up there?
Well sumptins goin on up there that's for sure.
Well my friend James flies one but he didn't say he had to go up there.
Of course we didn't talk much about why he comes here anyway.
I thought naturally it must be to see me but I could be mistaken.
What's he doin this James?
Mostly work having to do with earthquakes and volcanoes.
You think one is coming to this area?

Been in these mountains a while now.
Did notice the animals were gettin skimpier.
But I figured it was cause of the big cougar that
roams out that way.
Oh is he still around?
He almost jumped me and Beau once but this old wolf
chased him away.
Burt wiped his chops.and whiskers and gulped down
a glass of cold water.
You mind if we hunker down here for the night?
No. Not at all. Put Jesse into the coral and let her rest.

I'll just do that Missy and then come back for some coffee if
you have any and some of those cookies you bragged about
I didn't brag . I was just happy to have someone share them with me.
I'll pour you a big cup of Joe..
Ol Burt was in his 70's but strong as an ox pulling that mule of his.
I guess not every one is meant for the city.
People still like to go and get lost in the woods.
Beats an old folks home anytime.
You sure have a great hat there Burt.
Burt laughed
Yup. It's pretty full all right. He pulled it off to show me.
Got me lots of thread here in the inside and full of needles and hooks on the outside. Been used a lot too.
Is the fishin good?

Ya know, it is.
I can't say that I've been hungry.
Always had something on the line.
It's some God Awful beautiful country up there Ell.
If it didn't get so cold in winter, I'd stay there.
He pulled out his pipe and tobacco and settled in.

The weather was holding up.
Hey, you know there is a place to clean up in the bathroom Burt.
After you do that you can use the fold out couch for the night.

That's very kind of you Ell
Bones would sure appreciate it.
Anytime ol friend.
I found the days to be too short as I lay down to sleep that night.
It felt good to put my head on a soft pillow.
I kept thinking about James and why he was still by Bear Mountain.
or was he?
xoxoxox