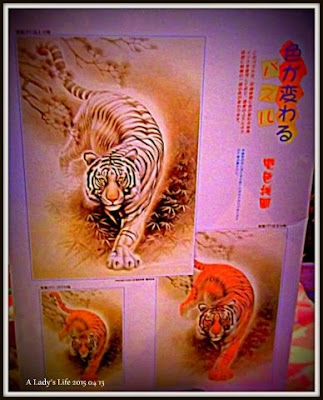 After about a week or so we heard the buzz of a small copter.

Burt and I exchanged glances.
The smart thing to do was to call it in and have the authorities look into it.
But the death of James kinda made it more personal.

I left a note just in case in the barn and told Burt to stay and hold down the fort.
Of course Burt wouldn't listen and packed up his Jesse for the 3 hour trek.

We slowly made our way up the rocky curves until we got to the the same spot
where we found James.
To our amazement the place was thoroughly cleaned up.
One would hardly know there was even a camp fire.
So we set up camp and this gave us time to look around.
Burt was a lot better at tracking than I was.

He found  boot marks I took pics of. He found broken branches.
At a small waterfall we got some terrific cold, sweet, water, to quench our thirst
and out a ways in the mountain, we heard a cougar.
If we could hear him, he could probably smell us.
Then in between the rocks I saw something sparkling.
Some kind of metal. I reached into the freezing water and pulled out
a watch. It looked like something James was wearing.

We found a few pieces of torn material from a fleecy checkered red shirt.
It got dark fast so we lit up the fire and began a meal and
to rest up for the trek home.
I kept checking out the watch . It was an Edox Chronodiver watch. Hmm not cheap.
Why would it be in the water out here?

It was what we found at home the next day though that really became a sign that something
was definitely not right..
As Burt went into the barn with the animals I went into the cabin  to find it all upside down.
Burt came out and told me the same thing had happened in the barn.
So was it on purpose that they flew by the cabin, to arouse our curiosity to go to Bear?
It gave them plenty of time to raid the cabin.
Seems we fed the tiger without knowing he was stalking us.
Thank fully they did not find the radio room.
I radio'd Bob and told him what had happened.
Seems there was a lot more to the James story but why was I not surprised?
Does one have to experience something to understand it?
I took as many pics as I could before trying to tidy up the mess.
I fed the tiger and he fed me.
Now we just have to wait to see who gets the next meal.