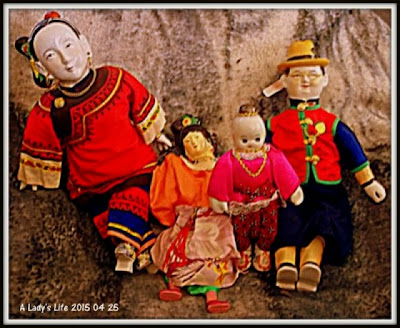 Here are 4 more dolls I collected over the years.
The little orange one is a hand puppet.
The one on the left is wearing traditional Chinese shoes they
wore way back when.
They look like a nice little family in their traditional costumes.

They came in a group of 4 and Chinese people put a lot of value in numbers.
To us,
Number 4 is related to the 4th Day of creation, when God completed the universe,
to include the sun , moon and stars, which separated night and day and gave us time.

In the 10 Commandments the number 4 is a Sabbath Day.

Eve is only mentioned 4 times in the Bible.

The Garden of Eden had a river which parted into 4 other rivers.

When Jesus hung on the cross, the soldiers divided his clothes into 4 parts,
one for each soldier.

God has 4 witnesses: miracles, wonders, signs and gifts of the Holy Spirit.

Rainbows are mentioned 4 times in the Bible

Ezekiel had a wheel in the middle of a wheel vision, where he saw
4 living creatures carrying a throne with 4 sides and 4 wheels.
Each creature had 4 faces and 4 wings.
Scary.

Later Ezekial had to proclaim to Israel
of the end coming to 4 corners of the land.

The Elders were asked  to repent
or else 4 judgements would come upon them dealing with sword, famine,
wild beasts and pestilence.
4 = death with the 4 horsemen of the apocalypse
4 last things death judgement hell and glory
the 4 horns of the altar in daniel

One has to shudder at the weight number 4 carries.

The number 400 is a symbol of a divine perfect time period.

This is what God said to him (Abraham, the father of the faithful): 'Your descendants will live in a foreign country, where they will be slaves and will be badly treated for four hundred years. (Acts 7:6)

When Abrahams' wife died at 127 years of age, Abraham bought a cave in Hebron for 400 shekels of silver. He was buried there as well at 175.
Isaac and Rebekah, his wife, were also buried there. (4 people.)

In China number 8 is the luckiest number.
They don't like number 4 cause it sounds like their word for death nor do they like number 13.
Number 2 implies harmony and germination. They speak of couples.
Number 7 implies holiness and mystery
Number 9 implies longevity and eternity. Lovers send 99 roses for everlasting love.

While we fight over the existence of God,
by 2030, it's expected, China's total Christian population, including Catholics, will exceed 247 million, placing it above Mexico, Brazil and the United States as the largest Christian congregation in the world.
"Mao tse tung,  failed to kill God.

I guess I should make these dolls a family of 3 with an Actress Auntie. lol

3 indicates multiples. It represents Buddha, Dharma and Bonze, so people toll the bell three times to worship Buddha and pray for the removal of calamities with 3 sticks of incense.

The Auntie puppet, is number 1, which is also lucky.
Lao Zi  says it is the closest to creation.

Here the Taoist word ‘Unity’ means ‘1’ and represents the mother of all creatures.

The last few days we've been watching Genocide without realizing that this is all about ideologies  land and money rather than people. Look how much blood was spilt for nothing, at this site.
http://necrometrics.com/20c5m.htm

We are not going about it the right way if we want to heal wounds.
No wonder mystics go into seclusion. They say there can be no solution here.
All people want to do is argue.

Have a wonderful day.