Getting to Know You. 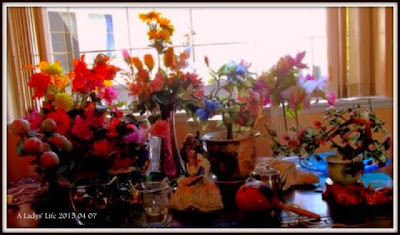 Supper was without a doubt interesting as James brought a good ol
fashioned Poulet BBQ already seasoned and cooked.
We just had to warm it up
and make a few boiled potatoes and carrots to go with a nice Chardonnay.

It was nice to have someone to chat with on the cabin veranda.

So do you have any brothers and sisters? he inquired.

Yes. I have a brother in Calgary. He's a High School Science Teacher
and I have a Sister in some kind of Law Clerk business.
I'm the black sheep that ran away from it all.
My Dad runs a Sporting Goods Store and he seems to like it.
Mom helps him.
You?

My brother is a vet and my parents run a small ranch.
They love horses and do the Equestrian horse show thing.
We have some nice Hanoverian jumpers and we breed and sell horses too.
They also keep a few cows.


Seems almost a shame when they kill so many horses just for being wild.
That's where I got Beau.

Ya. He ran free in the wild and one day we just made friends but he is his own man.
Quirky. This is how we got into summer entertainment.
He would never listen and do his own thing so I used it for us to make a few bucks.
The people love coming to see him and he got some what spoiled by all the attention.

Do you know what breed he is?

He's got a nice Arabian face though.

He stands 6.1  hands so he's not Arabian.
His back is not long so he's not a carriage horse and his hooves are
not very wide.. more for prairie running
and .....he has the temperament of a Mustang.
Likes to smile a lot.
But there is no horse I would trust more than my Beau.
He's got my heart, hook, line and sinker.

So I can't compete there . James joked.

No Siree Bob.No one stands even close to my Beau.
I teased.
The Chardonnay went down smooth as satin.
and it felt good just to sit there.I had to stop a yawn
creeping up on me.My eyes began to close.

I guess I better make up a bed for you before I get too sloshed.
Where did you sleep last time you were here?

Oh, I used the couch and Luke used the spare bedroom.

Ok so you can sleep there then.
I better turn in  since I have an early rise tomorrow.

I got out some warm blankets and gave them to him.

Al right. You don't mind if I sit a bit?

You know, you are the easiest person to get along with.

Am I?  You haven't seen me when I'm cross yet. I laughed.

No... I don't think you can ever get cross.
You just don't suit it.
I mean, I could be a serial killer and here you are, as nice as could be.

I think you are used to people being cross with you.
Besides, you don't know if I am a serial killer either.

I guess I'm not around too many people either. I am just like you.
I like to keep to myself and do my own thing.
So if anyone is cross with me, I don't know anything about it.

So, you are not a serial killer, right?

Okee Dokey then. I won't tell you either.
G'night.

Well this ended on a good note I thought.
I made sure to lock my door.

Before falling asleep I heard the door knob turn,
then a chuckle as he walked away.

I woke up early dawn just in time for a happy James walking in with
4 sparkling bass hanging from a wire.

Woah! What have you been doing all night?
Fishing?

Aren't they great? Perfect breakfast. he exclaimed.
I came to try to wake you but seems you were deep asleep.
I found your Bible here and it was either  reading that or go fishing
so I went fishing.
Is this how you pass your time at night?

I like to read up and sorta make sense of things. Like for example,
if most religions date  back to Abraham, then this is where we have to go
to find the discrepancies.

Haggar had to walk in the desert searching for water and she is the one who the Muslims commemorate in their pilgrimages to Mecca,  along with Ishmael, creating the possible source of the Lord's prophecy
“He will be a wild donkey of a man; his hand will be against everyone and everyone's hand against him, and he will live in hostility toward all his brothers” (Gen. 16:12).)

Ishmael did grow to be strong, wild and free and because of what happened tp him, didn't get along with anyone, even his own kin. He  fought every one and it is unfortunately through him, that Muhammad  founded the Islamic religion, construed to be  pagan.
Muhammad made Jesus equal to him as a prophet, instead of agreeing Jesus was the son of God.
Muhammad thought himself to be greater than Jesus and created more rivalry and division between people, instead of the unity and love Jesus tried to teach.

Neither the Jews nor the Christians would follow his preaching so he tried to kill the Jesus message making Christians second class citizens, dispossessing the Jews, sanctifying fighting , vengeance and promoting a Holy War.

The Jews , Christians and Muslims will never unite because of Jesus, who Muhammad denies
as a deity . The incarnation, atonement, the crucifixion and the question of God as a triad, Father, Son and Spirit, will never be accepted by Islam even though they proclaim to be attached to Abraham.

And so we have the story  today with so much killing through out the Middle East and Africa.
This probably is why people there are not allowed to use his name or talk about him because they fear the truth coming out. Anyway , any one can become a prophet if he has enough people to believe in him but it does not mean he speaks for God.
God is one and will always represent love and loving someone, means not to cause pain and suffering but to work united for the better good.
Most of the world tries to do good. We send missionaries to Africa to teach the kids so they can grow and make a better country for themselves and then these guys come in and kill every one.

Isn't that interesting. I never knew that....About Abraham that is.

The fish were sizzling on the frying pan.

I don't read the Bible much.
Don't go to church either but sitting out in the wild
I know that there is something ..... a lot more than we know or give credit
to.
It can't all be just that simple as Darwin and evolution.

We call God a creator and what is evolution anyway if not a creation?
We play with words, talking about the same things.

Look at what science is trying to do today with cloning for example
and when they try to create better plant specimens and animals to grow
with more or less meat and fat.
They create and new things evolve out of what they do.
Without creation, there can't be evolution.

You make some good points.
For sure evolution is some kind of creation.
It's a change. That's for sure.
It's not a total new beginning.

James looked at me and our eyes met .
It was like looking into the deep black chasms of our souls,
where all is hidden.
xoxoxoxoxox