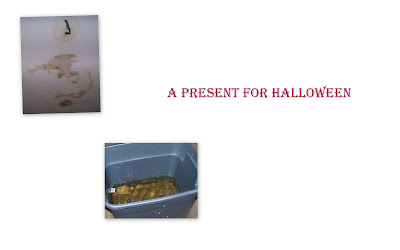 It's fall and the rain is pouring.
That's the norm in BC.
We had the roof cleaned and now the only room in the house I keep for guests, the living room, has a destroyed ceiling.
I woke up and water is coming through like crazy.

This is part of Halloween I guess.
Ghosts, goblins, witches,devils, all preparing tricks to create havoc for treats.
They started earlier than expected this year. lol

So it gives me a chance to discuss this water problem in BC.

We always have buildings with roof and water leakage problems and it makes me wonder,
knowing this, why they do not make good roofs here, knowing we have tons of rain?
Is it too much to ask to do something right the first time?

Our Olympic buildings for the athletes, were slapped together and they charged people
over one million dollars to buy a flat only to move into water leakage problems.
The city lost a lot of money on these buildings as did the buyers.

I never remember roof problems in Quebec and we had tons of cold snowy weather and here, all you have are leaky pipes and roof problems and the work is done by professionals.
They have laws about the normal Joe doing these jobs, although I can't think why, since the professionals do such a bad job of it anyway.
Give the regular Joe a shot and he'll probably do it better.

I asked one contractor why he was installing windows which I didn't think were adequate for winter insulation.
He told me people heat and cook with gas so the houses need to be airy for safety purposes.
So in other words, you spend money heating the outside, so why use gas, especially with the inflated gas prices?
People have to weigh safety vs the price of gas heating.
No wonder so many people have rheumatism and arthritis here.

Nothing makes any sense in the way people think today.
They build cheap and charge expensive.
They are told to use gas cause its cheap only to be charged more.
They are forced to use efficient expensive light bulbs for low energy consumption,
only to be charged more. They are told to conserve water only to be charged more because they conserved too well. lol
Then taxes go up and
every one complains but are told to be tolerant.
Tolerance is the key word here but to look at people,
inside, their souls show everything but tolerance.
People are angry. People are homeless.
You read the papers and it's full of violence, and
you see, nothing is about laws but about how to survive and to survive,
you need to break the laws.
So people die every day
from being attacked, legally robbed or commit suicide.
It's heading towards mob rule because there is no other place to go.
Laws are ineffective.
Laws are only good if you have people willing to accept them.
To listen to the news however, they say crime is down.
Go figure? Maybe they just took a lot of things off the
crime list . It's either that or put the whole country in jail.
It sometimes gets to the point when you have to laugh because you read the papers
and the people comment you need to tax, you need to make a law, you need to fine more.
And people, especially criminals, either don't have anything or have legally hidden everything.
The only people who get hurt, are the innocent who do not do things,
but make a mistake of signing the wrong paper, designed to legally rob them.
And this is the law today.
Judges sit knowing all this and do nothing about it.
No one wants to speak of root causes but if they did, the people who belong in jail are the CEO's Bankers, lawyers, etc... who know the laws enough to know how to break them to destroy society.
And this is law working against mankind instead of law which is supposed to help keep order and to defend mans' evil against man.

In the past, everything was about looking up towards excellence. Doing the right thing.
Today we have laws and excellence is frowned upon and the result is chaos.

Chaos is a perfect topic for Halloween.lol

Have a great day!
I know mine will be with all the repairs.lol
A new ceiling will be a treat. That's for sure.
:)
Posted by A Lady's Life at 9:34 AM

A leaky roof can cause such a mess! Hope you can get if fixed quickly and without being robbed blind.

Mama Zen the roof cleaners loosened some tiles and it caused major damage in the living room.
Like you said. What a mess.
But all the houses you buy here in BC you can expect such things.
For some reason they don't know how to do pipes or ceilings without them leaking when you use the tubs and showers.If I was a contractor I would never put a ceiling that could not be taken apart to fix properly without involving a major surgery kind of thing.

Okay, this post was an eye-opener! I guess I tend to look at my own problems and think that no one else has any! :)
In Edmonton, they don't insulate. Our home has a bow window front and back and both simply jut out over dirt (there is no basement under them) and they weren't insulated AT ALL. Our front room was so cold the first winter after we moved in, we could see our breath. When my husband started poking around, he discovered that the builders hadn't insulated around the fireplace (when you moved the 1/4 inch oak board, you were looking right outside and definitely had missed both bow windows. Our heating bill was astronomical! And we roasted during our two days of summer! So I agree. If there are rules, no one is following them. If there aren't, there needs to be!

Diane I think the laws and people are going too far.
The working man should have his just rewards for doing good and charity should not be forced on us. It should be done through people showing good ness. I prefer to give a man something from me than to give some organization and never know what happened to my gift.