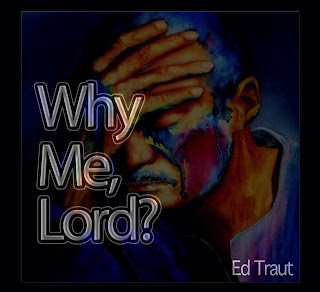 We all have such days when we ask ourselves this question.

We like to lay blame on others for our troubles instead of seeing the situation for what it is.

I never read Job and came across it and said to myself : "Yes. This sounds right."

So here is Job's Story.

1 In the there lived a man whose name was Job. This man was blameless and upright; he feared God and shunned evil. 2 He had seven sons and three daughters, 3 and he owned seven thousand sheep, three thousand camels, five hundred yoke of oxen and five hundred donkeys, and had a large number of servants. He was the greatest man among all the people of the East.

4 His sons used to take turns holding feasts in their homes, and they would invite their three sisters to eat and drink with them. 5 When a period of feasting had run its course, Job would send and have them purified. Early in the morning he would sacrifice a burnt offering for each of them, thinking, "Perhaps my children have sinned and cursed God in their hearts." This was Job's regular custom.

6 One day the angels a]">[a] came to present themselves before the LORD, and Satan b]">[b] also came with them. 7 The LORD said to Satan, "Where have you come from?"
Satan answered the LORD, "From roaming through the earth and going back and forth in it."

8 Then the LORD said to Satan, "Have you considered my servant Job? There is no one on earth like him; he is blameless and upright, a man who fears God and shuns evil."

9 "Does Job fear God for nothing?" Satan replied. 10 "Have you not put a hedge around him and his household and everything he has? You have blessed the work of his hands, so that his flocks and herds are spread throughout the land. 11 But stretch out your hand and strike everything he has, and he will surely curse you to your face."

12 The LORD said to Satan, "Very well, then, everything he has is in your hands, but on the man himself do not lay a finger."
Then Satan went out from the presence of the LORD.

13 One day when Job's sons and daughters were feasting and drinking wine at the oldest brother's house, 14 a messenger came to Job and said, "The oxen were plowing and the donkeys were grazing nearby, 15 and the Sabeans attacked and carried them off. They put the servants to the sword, and I am the only one who has escaped to tell you!"

16 While he was still speaking, another messenger came and said, "The fire of God fell from the sky and burned up the sheep and the servants, and I am the only one who has escaped to tell you!"

17 While he was still speaking, another messenger came and said, "The Chaldeans formed three raiding parties and swept down on your camels and carried them off. They put the servants to the sword, and I am the only one who has escaped to tell you!"

18 While he was still speaking, yet another messenger came and said, "Your sons and daughters were feasting and drinking wine at the oldest brother's house, 19 when suddenly a mighty wind swept in from the desert and struck the four corners of the house. It collapsed on them and they are dead, and I am the only one who has escaped to tell you!"

20 At this, Job got up and tore his robe and shaved his head. Then he fell to the ground in worship 21 and said:
"Naked I came from my mother's womb,
and naked I will depart. c]">[c]
The LORD gave and the LORD has taken away;
may the name of the LORD be praised."

22 In all this, Job did not sin by charging God with wrongdoing.

Blogtrotter Two is showing some incredible rocks by the sea... Enjoy and have a great week!

Thanks Trotter.
The cliffs and beaches are sure delightful.:)

There is a reason why things happen and as the universe is full of secrets, so is the will of God.
I can't believe there is so much cruelty existing on this planet without there being a reason for it.
When man learns to control his instincts, making him truly separate from the animal world, there would be less people to feed, less pollution and garbage and a healthier planet to live on.
Either that or prepare another planet for man to work and survive on leaving nothing to chance.
The story about Noahs ark was probably a story of an arc composed of tubes of DNA of a male and female of each species and brought here to the blue planet to replenish itself.I guess I believe in the creationist theory.

Thanks Trotter and Jingle.:)

6 awards,
please feel free to take any of them
Smiles!

ignore if you dislike them.