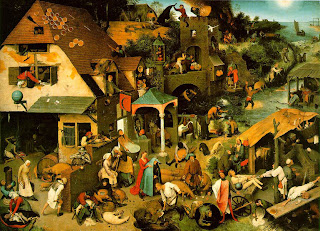 They can almost smell Soccer Victory in South Africa.!!!!

At first glance, you may think the painting simply illustrates the people of the Netherlands. That was what I thought. But as I looked into this painting, Netherlandish Proverbs (1559), painted by Pieter Bruegel the Elder in Staatliche Museen, Berlin (now Gemaldegaerie, Berlin), I learned that every individual, object, and action all have a satirical significance. There is said to be over 100 proverbs illustrated in this painting, in which some are still used in the Netherlands and the Dutch.

Some of the proverbs illustrated in the paintings are….

To choose between the devil and the deep blue sea. =

What do you do when you are faced with two equally bad alternatives /choices?

Does one live to eat or eat to live?= socrates

People hate what they do not understand.

So does this mean you will not hate once you understand?

I guess it is the same thing as saying don’t judge a man until you walk in his shoes. Then I guess it's ok lol

Thanks for a neat post. I very much enjoyed trying to find the illustration for the proverbs listed.

George_ Wikipedea has pictures under Netherlands Proverbs that show the proverb and where it applies.
Its so interesting.

Yes, the Dutch have many sayings and I wish they had a dictionary for that in English, because they still come to my mind sometimes in...Dutch, of course.
As a painter all I can think of the WORK that went into this painting!