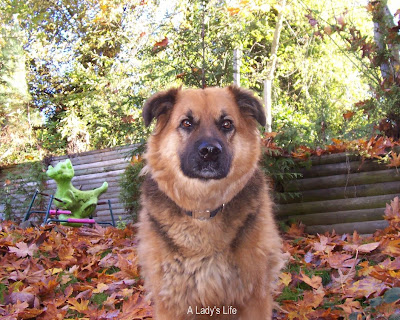 Since I have a dog named Beau, well actually, he's isn't mine but my oldest son's dog, I could not resist to put on this bit with Johnny Carson and Jimmy Stewart reading a poem on a dog named Beau.

Our boy is similar, loves his freedom and to eat but he doesn't bite. When you sit he never stops pushing your arm up so you pat him. He can be very pesty. As a pup he was very friendly and smart, but because people's dog's who were not leashed, came up to him with aggressive tendencies, when my son took him for walks, he learned not to trust other dogs and barks at them before they decide to come to him when he is leashed.
Because of this, he doesn't go out much now lol
The young have the girls and no time for dogs and the old are too old to deal with this. lol

We jokingly call Beau an ol junk yard dog because of his colors and his rugged stalky look. He is a golden / border collie and something else mix lol .
I never saw his Dad but I understand he was humungous. Both parents were country dogs. The Dad got hit by a car and the Mom was shot by conservationists, for chasing wild deer.
Can you imagine that? There is no freedom for dogs anymore.
Even in the countryside. But the owners were warned.

Beau loves to play hide and seek, especially when he's been doing something bad. lol
He is really a great dog.
But then...... most dogs are. Even the bad ones.

and it was lovely to hear jimmy read his poem... many dog owners can relate, methinks

Juliana - I am a weeper for all sentimental things lol
Jimmy makes things sound even moreso sentimental. lol

Ahh...Beau is a cutie! I so enjoyed watching the video. I'm a full on weeper too. I just can't help it.

I always enjoyed Jimmy Stewart, so it was good to view this video. It sounds like your Beau was quite a dog.

I think Beau is beautiful!

George - I still have my Beau. Over the years I have had many dogs. When I raised them they were perfectly trained. But they get old and die Some I took from the SPCA to train so its easier to find good homes for them. but the new ones were for the kids to raise.lol And this made all the difference.
I think if I ever get other dogs it would be under consignment like maybe to train for the blind or the incapacited..

Gattina - Yes Beau has very expressive eyes. It's what makes him so loveable.

I know your dog named... I mean your son's dog named Beau!!!
Have a FAB weekend!
Fifi