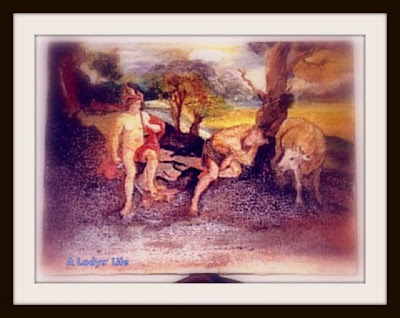 This was a painting I was working on for a long time, layering paint.
I finally got it to where I wanted it and then we lost it
during a move. lol
Mercury and Argus by Rubens  from the Metamorphosis by Ovid.
O well. Wasn't meant to be.
I still have a picture of it. I might redo it again.
It's not as nice cause enlarging it changes the way it looked
but still it gives it some originality.
The story goes........
Zeus falls in love with Io, Heras' priestess and the daughter of Inachos.
Hera finds out, so Zeus  turned Io into a white cow and himself into a bull.

Hera was wise to his ways and asked to be given the cow who she put
under guard of Argus, her shepherd.
Zeus commands his son Mercury to set Io free, by lulling Argus to sleep
with an enchanted flute.
Mercury does so and then cuts off Argus's head.
Io escapes to Egypt and becomes the Goddess Isis.

That's a pity that you lost this beautiful painting !

I really like your original painting. I hope you'll redo it.

Gattina Ya it kinda breaks my heart but I loose so many things.
Hope it found a good home.

Thanks George
This painting was like 18" x 18"
I usually like working on bigger canvases.and this is why I always say a painting is never done cause you have to layer in thin layers so it builds into something life like.

I felt I really put something into this painting and then it was gone.
Today they do things different and much faster and the paints are different too.