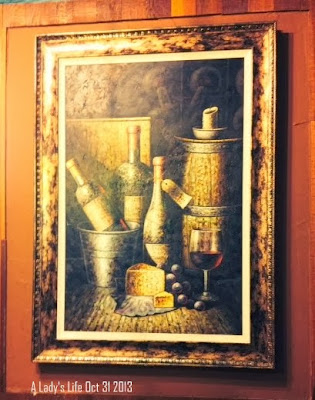 Boy we are all up early today at 4 am
.We got two boxes of chips and chocolates just in case but our street was dead.
So hubby said let's
go for a drive and see Halloween So we did but not much was going on.
Many streets had fireworks and malls gave out candy. Otherwise

people just put up their Christmas lights.
My other knee aches for a week now. So unexpected. It's a killer pain even without stepping on it
I have no idea what this is. It feels dislocated and hubby too said his knee was hurting.

Even lying in bed I have to find just the right position for it.
Now the other leg I don't even notice. lol
Last time I had shoulder pain I had to heat it 6 months before it went away. This darn damp weather.!!! 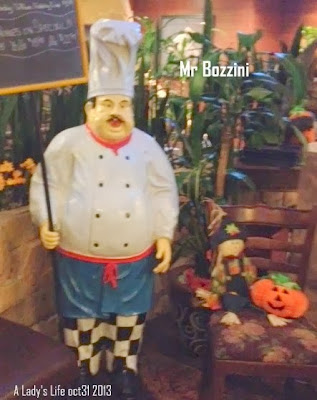 Anyway,  there is an Italian restaurant called Bozzini I wanted to try.
So we drove up into the druggie area and found it. I had a great pizza and hubby
also had a gyro with rice, salad 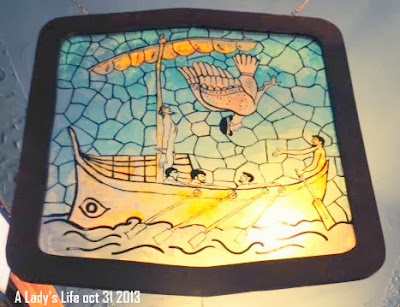 He didn't finish his plate but we also had humous and calamari.
We met an older gentleman, a local man and got to chatting. It was very nice. 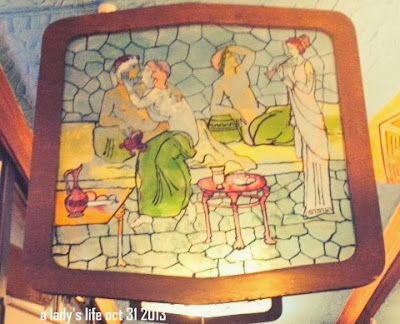 He said the area we were in is very dangerous.
We said ya we know We saw a man standing arguing with a hydro
pole and then boxing with it.

So many people with fried brains. 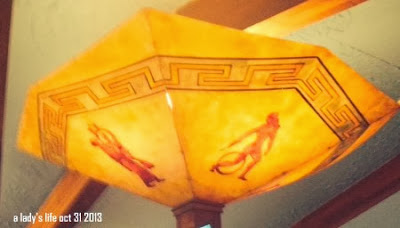 We remembered the restaurant we were in, was once a car wash so
now we can tell people we ate at the car wash. lol
On the net the place looked exquisite but even though the food was good
I won't risk going there anymore.
It really is a bad area. Too bad. 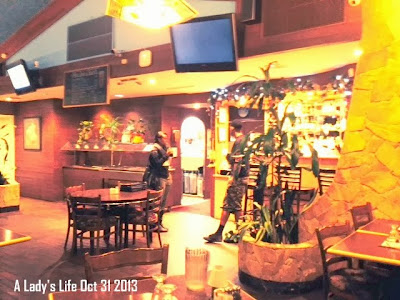 As we looked for it I said , when we find it , we probably will not want to eat
there cause it looked so spooky.
Halloween for sure. lol

He asks to go out all day and then pees inside anyway.
I think he can't hold it long anymore.
If he continues to do this He will have to be put down or live outside.
He likes to sit outside but then barks at every noise he hears. The neighbors won't like it.
He's an inside dog but with very thick fur.
The neighbors have a rooster and chickens. I think Vancouver is allowing people
to keep 4 chickens in the back yard.
Tanya has to get her stitches out today but she scratched her bum and still has scabs so
I don't know if today is a good day to take her but I hate to keep the collar on her
and she wants to play. She's tired of sleeping. lol
Such a good dog but they understand everything.
I said put the dog down and she began to shake.
I held her and told her she was my best girl. lol
She has another gland lump on her front and I wanted to take
it out but then this bum thing happened so the poor dog needs a
rest and then go through everything all over again.
Thats what happens when we get old.

xoxoxoxoxo
Posted by A Lady's Life at 8:14 AM

I am praying for your furbaby girl. They are like our children.
We have 3 poodles and our oldest Mocha this past summer went through surgery and he is 15 yrs. old.
It was VERY hard. They are so loving and faithful and sweet, I am sure this is wearing on you.
Prayers and Love sweet friend,
Tricia XO

Thanks Prims. So many things to cry about.lol Animals look into your eyes asking for help and sometimes you can and sometimes you can't.We all get old.
My animals are getting old and I am preparing myself . Usually around this time we look for a young puppy to blend in to carry on so its not hard on the family.
When our shepherd was put down for double hip displacement our home was sad indeed. Then We got this little fur ball golden Nugget and he just lit the whole place up. He was a saint of a dog.
They age fast though and he died. Tatty died at 18.Now Beau is over the hill at 14 and Tanya is catching up. at 9.We old people have aches and pains and the young are never around. Things change. Life goes on.