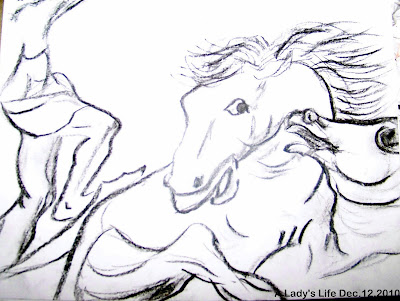 No matter how many times this picture is drawn, or sketched,
I don't think people will ever get tired of it.

These artists seem to capture each generation with equal fascination.

You want to find out all you can about these people.
Who they were, what they did and what inspired them to create with such passion.

They drew their family members and their friends and just people in general
and here we are, years later, looking and wondering,
what were these people thinking at that moment?

Seeing a similar, so familiar face, in todays' world,
a fragment from the past...
then brings forth this feeling of
deja vous.

You've been there and done that before and you know because
you've seen it in the canvasses, the souls of the old masters.

:)
An out-of-towner accidentally drives his car into a deep ditch on the side of a country road. Luckily a farmer happened by with his big old horse named Benny. The man asked for help. The farmer said Benny could pull his car out. So he backed Benny up and hitched Benny to the man's car bumper. Then he yelled, "Pull, Nellie, pull." Benny didn't move. Then he yelled, "Come on, pull Ranger." Still, Benny didn't move. Then he yelled really loud, "Now pull, Fred, pull hard." Benny just stood. Then the farmer nonchalantly said, "Okay, Benny, pull." Benny pulled the car out of the ditch. The man was very appreciative but curious. He asked the farmer why he called his horse by the wrong name three times. The farmer said, "Oh, Benny is blind, and if he thought he was the only one pulling he wouldn't even try."

"Will I ever be able to race my horse again" the owner asked the vet. The vet replied, "You certainly will, and you'll probably beat her too!"

Well neither can a fence!

Love the story of of Benny! :)

Thanks Akelamalu.
I love horses.
There are so many stories about these brave kind herding animals.

I really like your sketch and the story of Benny. Thanks, too, for the video.