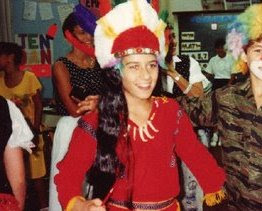 Two American Indians and an Irishman were walking through the woods.
One of them ran up a hill to the mouth of a small cave.

The Irishman was puzzled and asked the remaining Indian what it was all about,.
'Was the other Indian crazy or what?'

The Indian replied 'No, It is our custom during mating season when Indian men see cave, they holler
'Wooooo! Wooooo! Wooooo!' into the opening. If they get an answer back, it means there's a beautiful squaw in there waiting.

He also tore off his clothes and ran into the opening.

The Irishman now alone, wandered in the woods for a while, and found a third large cave.
He was amazed at the size of the huge opening and he was thinking, 'Woa, man! Look at the size of this cave! It is bigger than those the Indians found.
There must be some really big, fine women in there!'

He stood in front of the opening and hollered with all his might 'Wooooo! Wooooo! Wooooo!' Like the others, he then heard an answering call, 'WOOOOOOOOO, WOOOOOOOOO WOOOOOOOOO!'
With a gleam in his eye and a smile on his face, he raced into the cave,tearing off his clothes as he ran.


NAKED IRISHMAN GETS HIT BY TRAIN

Hi, love your humour....ha ha ha. Thats a good one.
You have a nice day and keep a song in your heart, Lee.

I have to start to make a scale to measure my laughter when I read your stories. This one has reached 10 (with a scale going from 0 to 10).

lol
Sometimes people do funny things and you see they are not thinking.