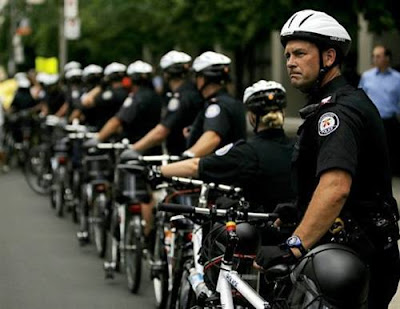 It was really interesting when our leaders stood up and told us that we are no longer sovereign nations.

We are all interdependent and we have no choice in the matter except to continue on our paths.

It is no wonder we had so many protestors and violent behavior on city streets and from underground sewers.

You trust people to lead a country and instead they sell it out.

Well now that people know, they need to open ma and pa stores and sell and recycle home made products to bring business back home.

Of course this will never happen because people like to talk but when it comes to paying the bills they go for the paycheck.

Comes a time when the taxpayer has to say the government is pushing its limits.

Otherwise it seems man will totally destroy it the way he is going.

I personally feel violence on city streets, resolves nothing.

What did they change by doing it except get over 500 people arrested?

Did they really expect to have access to leaders of nations so they could spit and throw rocks at them?

for some of this cost so next time they are not in too much of a hurry to break windows and burn tax paid police cars.

We vote for MLA’s to represent us in Parliament and if we do not talk to them, then they talk about things other people who do talk, want.

So its our own fault. If we do not like what they are doing and saying about us then we have to make them listen before its done not after.

Like for example here in BC they want the HST (Tax) passed and they are forcing everyone to pay it whether we want to or not.

We were supposed to have the GST only for a short period of time. So instead of getting rid of it they are replacing it with this HST.

Our Electric company forced us to buy new curly fry bulbs, which apparently are not good for people, so we could save money. Apart from them being expensive, the Electric company now is increasing their rates anyway,

so the consumer got nothing but higher payments and more expensive bulbs to buy.

On Vancouver Island, they are told to use water sparingly. The people denied themselves water so well, that the water company didn't make any money and is going to raise the water meter rates.

Why are people not talking? Shouldn't everyone be talking about this?

Today we go into our health care system and we are not even sure if the tools they are using on us are sterilized or not.

Its pretty bad when they do operations but what about all the women going in for their regular check ups and then getting sick and no one knows why?

The wrong people are talking and this must change.

It is wrong to give up sovereignty of a nation, a state / province, a city, and even for an individual.

Freedom is so hard to obtain and so easily lost.

Thanks for a very thought-provoking post. Your last sentence is both profound and true.

Well the HST is sending a lot of people to shop south of the border so its good for the states.