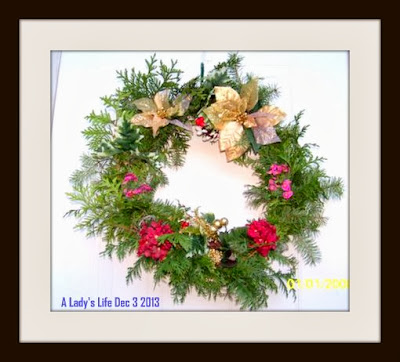 Had a very full day yesterday
Started the day making three bells for the tree
Then we went shopping
Then I made my eggplant spread which is very good to eat with toast as an appetiser or on a dish with your turkey.

You bake two eggplants. Skin them. Then you add some olive oil to a pan and fry thinly chopped onions and garlic. Then the eggplant , then add shredded carrots and thinly sliced tomatoes. You keep cooking these , while mixing with a wood spoon. I use a fork to mash everything while they cook.
Then I add black pepper and lemon juice for taste and I love the results.


After that I made sure to buy the small sweet pepper which come in red and orange in a pack.
I decided they would look great stuffed and to serve on guests plates. I stuffed them all with mince meat rice carrots celery garlic, onions (all chopped small) and I added a few chopped tomatoes.
I had enough meat stuffing left for 4 more big peppers.
I covered them all with tomato sauce and added some water and let them steam. My husband loves anything stuffed.
They turned out great.

Then I sat down to make wreaths for the front door I made two from the pine and cedar in my yard.
The flowers I had at home so they virtually cost me nothing this year to make.
Just the wreath without decorations cost 14 dollars at the Superstore and it makes me wonder why people would buy when we have so much stuff lying on the floor waiting to be picked up.
Anyway this was a nights work and by this time I was already very tired but glad they hung outside on the doors. You see one in the picture  above.

At Superstore as I was going in, the police had a guy on the floor they were cuffing. he was screaming Help me !Help me! I didn't do anything!! I just came to the bank and they are arresting me!!

I asked one employee what was going on and she said he is confused.
He thought he was at a bank.
Since the Olympics, Vancouver escorted all these druggies out to Surrey and now every time you go out someone approaches you to ask for money for gas (they have no car) or to bring your buggy to the cart hut so they can take a looney out of it. ( since pan handling is against the law).  You see more
and more brain fried people and yet people like Mayor Ford in Toronto still stands promoting crack and marijuana. Nothing wrong with it he says I'm just a normal guy.

Well maybe he is a normal guy, I don't know. Are we all crack heads out there?
What's normal these days? When you look at the streets it's pretty scary if this is what's normal.
You don't want to see this spreading.

|Helping them financially is not an option cause it goes back into the problem they have.
I am not sure if the government takes care of their social needs by paying the rent and giving them money or cards to buy food so they don't spend on drugs and alcohol.Good way to control the population. Let them fry their brains and then control their money. The Power hungry  Liberals already got a whiff of how getting votes could be fun. Let the people get what they want and we will control what they need.

Superstore used to give 25.00 dollar cards on 200 dollars worth of goods bought but then the people would spend a dollar of it and take back the money so now they have a point system you collect
to buy goods from the store for free after so much is spent. My husband has enough for 40 dollars worth of goods right now. It's good to keep for a rainy day as they say lol

My son went snow boarding and they gave out annual passes on Grouse so even though they decided
there was not enough snow yet to board, they got their passes and will use them I am sure this year lol I told him on the news they said one boy flew off a cliff on his snow board and killed himself, after he just finished telling me it was the safest mountain to board on. Nothing is safe and you need to wear helmets.
When he got home he loved the wreaths and I even got a kiss for making them.
Then he chastised me for the dirty kitchen
I told him to stop being negative like he always tells me. lol
We could go on for hours discussing what negativity really means. lol

Oh well. The night ended with a power failure at 8:30 and then this morning around 8 another power failure.
I hope this is not becoming a habit. There I go being negative  again. Easy to do when the house gets cold. lol
xoxoxoxoxoxooxo

You're so industrious, love the recipes and the wreaths!

I made an advent wreath with 4 candles to light on the 4 Sundays before Christmas.

I still have to make mine Gattina.lol
Maybe today. The candles are waiting.