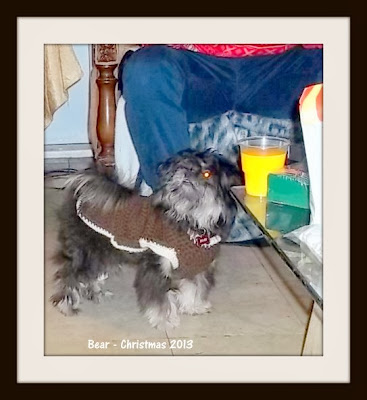 This is Bear.
He is a Shiranian, a mix of Shitzu and Pomeranian.

He is such a friendly little pup. He tried to play with my old dogs but they were not in play mood.
They are set in their ways and Bear looked into Beaus eyes so lovingly to try to entice him to play but Beau just slowly wagged his tail to say ya ya ok kid I know. I luv you too but go find a toy or something lol
. Tanya would have nothing to do with him and strutted around with her don't bug me nose up in the air. lol

I made two outfits. One for my Tanya and then another one for Bear and this was his Christmas gift.
Beau didn't get a gift because he went under the tree and sniffed his out and opened the box to pull one chewy out, so we had to hide the gift but he still got a chewy as did the other dogs on Christmas Eve.

Bear did too much partying and he got ill in the middle of the night and the kids were worried sick over him.
I gave him yogurt to calm his stomach which he immediately threw up but I told the kids he still has some good bacteria in him and to give him another spoonful in a few hours.

By morning he was back to his usual jovial self, bouncing around happily, tail wagging a mile a minute and full of kisses.
He has so much character that it is hard not to fall in love with this pup.
Once he was soo happy to see me, he just ran all the way up my body to kiss. I thought gosh, its a good thing he is friendly cause if he wasn't that was some fast move to get into someones' face and totally unexpected. He has absolutely no fear.

Thing is, with this dog , it is  also very hard to see his face but when he was sick his nose jutted out and he looked so miserable, you had to feel for him. Poor little guy.

His Mama is so very proud of her baby. She loves him to bits and outfitted him in Santas' hat and rings with bells on all 4 paws. He looked so cute and jingled every where he went.
It didn't take him long to undress lol

I managed to take a relatively good shot of him to share.
He is just one adorable little dog.
xoxoxoxox

==========================
Dear Treelanders:
With the holidays upon us I would like to share a personal experience with you about drinking and driving. As you know some of us have had our brushes with the authorities from time to time on the way home after a “social event” out with friends.
Well, last night I was out for an evening with friends/clients and had a few to many cocktails, followed by some nice red wine. Feeling a bit “happy”, I still had enough sense to know that…I may be over the limit. That’s when I did something I’ve never done before… I took a cab home!
Sure enough, on the way home there was a police road block, but since I was in a cab they waved it past. Thankfully I arrived home safely without incident.
This was a real relief and surprise because I had never driven a cab before. I don’t know where I got it and now that it’s in my garage I don’t know what to do with it..
Drive safely this holiday season!
xoxoxox
Posted by A Lady's Life at 11:59 AM

What a fun pup! The personal trainer of the puppy dogs!