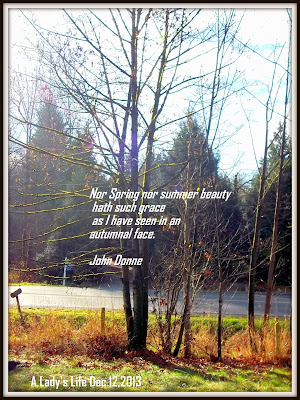 Last night I did another doggy sweater so now
there are two, for two dogs, to be put under the tree.
I might make a bear face for the second one since the dog
it is for is named Bear. lol  Right now it is a simple brown
with white trim just like the one I made before.

The days just seem to fly by and it is the 12th already.

Another day to think about what to cook.More dishes to wash...
All things I just love to do.
It is so much easier to go to work than to sit and make plans at home.lol

I think it would be nice to have a robot walking around doing the daily house chores.
The beds would be made , the dusting, the vacuuming, the toilets.
That's already a big help right there.
One of the parks here has a Christmas train for the kids every year.
I think this is a great idea for family outings.
If my kids were still small I would venture out for sure to have a ride on it.
I like to shop at night these days because the city lit up all the streets
with all kind of lights and this gives you a warm feeling.
I used to like going to the zoo and we pass by it all the time and I always tell my husband
one of these days we should stop and visit for old times sake.
Kids are the most wonderful gifts for parents. No treasure is worth the price of one child.
I would not have liked to miss one day of my childrens' upbringing and I was a very lucky Mom
to have been able to be given the chance to do so.
Very blessed indeed.

Whilst in China, an American man is very sexually promiscuous and
does not use a condom the entire time he is there.

A week after arriving back home in the States, he wakes one morning to
find his penis covered with bright green and purple spots.  Horrified, he
immediately goes to see a doctor. The doctor, never having seen
anything like this before, orders some tests and tells the man to
return in two days for the results.

The man returns a couple of days later and the doctor says, "I've
got bad news for you, you've contracted Mongolian VD.  It's very
rare and almost unheard of here in the US,  we know very little about it."

The man looks a little perplexed and says, "Well, give me a shot or
something and fix me up, Doc".

The doctor answers, "I'm sorry, there's no known cure.
We're going to have to amputate your penis."

The man screams in horror, "Absolutely not!  I want a second opinion!!!".

The doctor replies, "Well, it's your choice..  Go ahead, if you want, but
surgery is your only option."

The next day, the man seeks out a Chinese doctor, figuring that
he'll know more about the disease.  The Chinese doctor examines his
penis and proclaims,

The guy says to the doctor, "Yeah, yeah, I already know that, but
what can we do? My American doctor wants to cut off my penis!

It sounds as if you are doing a great job of getting ready for Christmas. I enjoyed your story of the man who visited China.

By the way, Pikes Peak is named for Zebulon Pike who was the first American to see the mountain in 1806 while on an expedition into the mountains.

That joke made me laugh out loud!

Thanks for the info George.

lol I did I Mama Zen lol