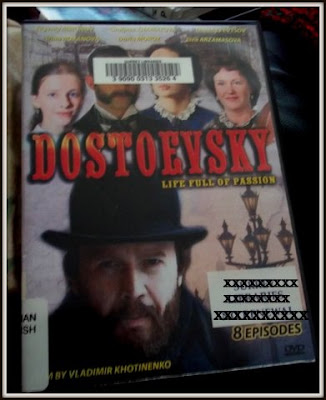 I love books written by Dostoyevsky.
As a kid I would lie on my porch divan with a bushel of McCintosh apples,
the best apples in the whole world .
We would go to the orchard in the fall, to collect them off of trees,
helping the farmers.

The best apples, went down well with Crime and Punishment, The Gambler,
The Idiot , Poor Folk, Demons, Brothers Karamazov (my favorite),
Notes from the Underground.
As a kid you don't know what treasures you hold and read until one day,
as a grown up, things begin
to fall into  place.
This is why I always say kids need their space and their own world to live in.
Mine was around books which I devoured with passion.

I never really got to know Dostoyevsky as a man though .
This foreign movie, in 8 episodes,
depicted him so well and one could see what he went through to write such books.

This movie showed him as a convict, gambler, lover, and a famous writer.
He was exiled to Siberia , suffered from epilepsy as did his son who died of it.

He lost his first wife to consumption. They showed him to be a compassionate man
who suffered deeply and needed support from his brother and aunt and then finally his
last wife.
An artist painted his picture and as people came to the gallery to look at his portrait, some to
sneer and make remarks about his books and life , others saw a great suffering in his eyes.
A man of soul.

I am glad I saw this movie by Vladimir Khotinenko and I think others would enjoy it too,
enough to actually find it worth while to read the books he wrote.
The scenery was good as well
xoxoxox
Posted by A Lady's Life at 10:42 AM