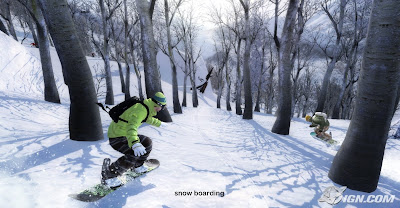 This is a great shot taken of snow boarders enjoying a day of peace and beauty in clean
white beautiful quiet surroundings.
It's just you and the swishing of your board on the snow.
What a great life!

After begging my son to stick to skiis, snow boarding with his friends became something else he wanted to try and do. I should be happy since it gets him away from soccer but I still prefer skiis to snow boards lol.

The kids, loaded the van and went up to Mt Seymour, since I told them this is my favorite mountain for safety purposes but it turned out Mt Seymour was not ready and snow bound so my van got stuck up there and the kids decided they were going to try another mountain. So they headed on to Grouse.

When learning to ski, my son just got on the skiis and took off without a glitch but it took him a bit to relearn with the snow board.
He managed to get it quickly and knowing how concerned I was about him snow boarding, he made sure to put on a show, telling me he hurt his foot when he got back, knowing I'd be upset.

Well then of course it wasn't true, so they got into the details of their day and how much fun they had.How many times he fell, how hard the snow hit his face and required a ski mask and of course never without a helmet at the speed you go. I reminded him that if he can't seem to miss a tree to make sure he does not go into it head first. lol All tips kids today don't need because they already know everything . :)

Grouse was also inundated with snow. They have a lift to get up there and the view is so nice for even those like myself who do not ski anymore.
Unfortunately they did not take pictures so I am not able to show any.They also give buggy rides on Grouse, and the boys said they even saw some deer.

It's a place where they even speak of a few bears hanging around. So one needs to be able to ski or snow board fast to get away lol.

I told them in Scandinavian countries they have deer races, whereby you attach a reindeer to reins and it pulls you on skiis.
What fun this can be as well. Now this is something I'd love to try myself.
BC should look into it since we have ample deer living around here.

Ahh! Nice to be young. People should never age so they have a chance to try everything there is to try in life. Nothing like having your soul rejuvenated and spiced up with a little harmless sport, fresh air and solemn quiet beauty.
Just hearing the stories made me feel like I was right there with them.:)

Vancouver and BC in general has a lot to offer in terms of mountains and things to do on them, all year round.
Grouse, Cypress, Seymour and Whistler are the best known but we have so many others to attract all kind of people for tobboganing, skating, cross country skiing.
The sky is the limit.

BC, is natures' way of giving us a glimpse of what heaven looks like.
Absolutely breathtaking!
It is also wild. You can see it in the eyes of flourishing Eagles perching overhead with 8 foot wing spans and in the eyes of other animals of prey who need to hunt to survive and have no set rules to live by.

Hope you come out and see for yourselves one day. It's an experience you will never forget.
:)

A Priest was about to finish his tour of duty, and was leaving his Mission

realizes that the one thing he never taught them was how to speak English.

So he takes the chief for a walk in the forest. He points to a tree and

The chief looks at the tree and grunts, 'Tree.'

The Priest is pleased with the response. They walk a little further and he

points to a rock and says, 'This is a rock.'

Hearing this, the chief looks and grunts, 'Rock.'

a rustling in the bushes. As they peek over the top, he sees a couple of

natives in the midst of heavy sexual activity.

The Priest is really flustered and quickly responds, 'Man riding a bike.'

The chief looks at the couple briefly, pulls out his blowgun and kills them.

teaching the tribe how to be civilized and be kind to each other, so how

could he kill these people in cold blood that way?

The chief replied, 'My bike.'

Why does Santa owe everything to the elves?
Because he is an elf-made man!

What did Santa get when he crossed a woodpecker with kleenex?

I don't like winter or snow and all related winter sports even when I was young, younger youngest ! I don't know why but this year suddenly I got the Christmas decoration fever ! Today I wanted to put some light garlands in the hedge and it started to snow ! Offended I went inside the house !

lol
Gattina - I don't believe you. You must like it if even just a little lol
What would Christmas be without snow?
:)

I don't mind telling you how jealous I am of all this snow. Beautiful!

I cannot believe that winter is here already. It feels like summer has just ended.

Sandy - It sure is beautiful
But I guess for people who need to go to work every day blizzards are not appreciated lol
I , on the other hand, am enjoying rain.
No snow here. BC is like that.
Teritorial lol

flutietootie - I live in a place where you can go fishing and swimming in the morning and skiing in the afternoon, practically all year round.

Winter is far from being my favourite season; and snow is absent from Lisbon... Fortunately... ;))
Great bike story!!

Waiting for you in Luxor!!

Trotter.= I always think. If I was to die somewhere, would it be in the cold where I'd be preserved or in the heat where the bugs would eat me.
I always come to the right decision.
Cold is better than hot.....for a while anyway.
lol

I would love to see the beauty of B. C.in person. Your picture is absolutely wonderful. I like that crisp, clean snow.

George - where we are is muddy wet and dull but once you cross over into North Van you can feast your eyes on plenty.
I don't envy people shoveling though.
lol and living on hills can be treacherous up there.