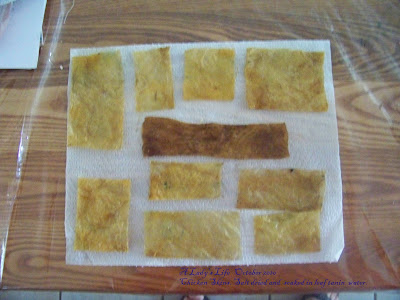 I tried something new to see if it would work.

My parents used to collect chicken skins which my Dad would roll up and freeze and then chop up,

since its easier to chop when the skins are frozen.

Along with other leftovers, they would place everything outside on a flat board they attached to a post.

I must say, I was impressed with the collection of birds they had amassed on that board.

Such an assortment would sit and wait for their daily meal and they all got along.

As soon as they would put out a board full it would be cleaned off in a matter of minutes.

My parents would sit , watch and enjoy behind their sliding door.

I guess the smell attracted other animals because they would also have deer, rabbits and other critters

which would show up and make their yard home.

Well I don’t feed the birds here as the winters are mild but I do collect the chickens skins like my parents did,

always thinking maybe there will be a time I could use them to feed the birds if we ever have snow and frost.

Since that never happens and I keep collecting the skins, I decided the fridge is meant for food , not chickens skins loll

Now, in the fall, I collected some dry leaves and boiled them. When the liquid cooled, I put the chicken skins

into the colored water to see if they would absorb the tannin from it.

I didn’t know how long they had to be kept in this water but I kept them in there two days.

After drying again, this is what I got.

Nice flexible yellow pieces I can sew up into something and even paint on.

Another batch I didn’t dry first and just put them into the tannin right after defrosting.

They changed color to a deeper brown..

I put one in the middle to show you the color difference.

Then I dried them as well.

I like the first batch better since the color is nicer, more natural.

I don’t know how many chicken skins one would need to make a vest out of but I would imagine quite a few.

But for small things like a change purse, clothing name tags, or maybe clothes for a doll, I think they can become very useful

I was also thinking that maybe if the skins were curled and dried, they would also make good chewies for dogs.

But then we are told not to eat chickens skins so why would we give them to mans’ best friend?

Birds are different, since they eat everything they find in the wild anyway.

For Thanks Giving I got a large turkey and for the first time I skinned it and rolled it out on an open pizza box to absorb the fat that drips off of it when salted.

Now this made for a real nice piece of skin one can sew or paint on.

Like they say, preparation is half the fun but you learn something. Maybe next time I will boil the tannin leaves with a few beets in it and see how the skin turns out.

It's good to be back I was off line for a while. It's amazing how the internet affects one's life and it took a while to get used to not having it. But then I had more time for other things like visiting the library and cleaning house lol

Things I used to do but have no time for anymore. It's so easy today to have this marvelous machine at your fingertips but now I have to debate if it is really that good to be so dependent on a machine.It hurts other things which may fold as a result leaving people with nothing but one thing.

I do hope libraries don't suffer as a result of internet. There is still nothing better than a good book in hand.

Have a good day everyone.

That's an interesting way to make friends in the animal world. Thanks for sharing that experience.

Sandy - around my place we have falcons and eagles and the birds hate them flying around. When we hear a lot of shrieks in the air, we can be sure there is a falcon predator up there in the sky.
But my Dad seemed to have made them all friends and hunger overtook fear.
They were all too busy grabbing things until only the sparrows were left to pick up the last few seeds and they did a great job :)

I found this to be very interesting. I wouldn't have thought about using chicken skins as a way to attract and feed birds. The difference in color that you got from your experimentation was also interesting.

george: birds eat meat In fact, they eat everything.
You never have to throw out food and since they need grease , the more you have the better, in winter.
My parents never threw anything out.For them food was sacred and had to be eaten, if not by them then by an animal.So their yard was full of hungry critters . "The only drawback is that once you start to do this you have to continue till spring.Some one left doves there and you could hear them coo every morning and evening all year round and it was such a pleasant sound.

That's very interesting !! I find that a great thing ! Have to tell it in my painting group, there are lots of women who do crafts of all kinds and that's a wonderful idea I never heard of either !
I was on holidays also with limited Internet access, so I could post but not really visit !

Some really interesting things to do with chicken skins but I just had a horrible thought - birds eating chicken skins is a bit like canabbalism isn't it? :0

Gattina - In school they taught us how to do very nice work on leather and I never forgot how proud I was with my finished product.

Akelamalu - Birds eat other birds. How many time do we see crows munching away on road kill?
That's just a fact of life.
Survival skills and environment trying to clean itself up.
Considering you will throw the skins away anyway, why not feed it to the birds who need food and fat for warmth to survive winter?
This may help other birds like sparrows (my personal favorites along with robins)to stay alive from predators like falcons and owls. etc...
Anyway I found another use for the skins and I thought it would be fun to share.:)