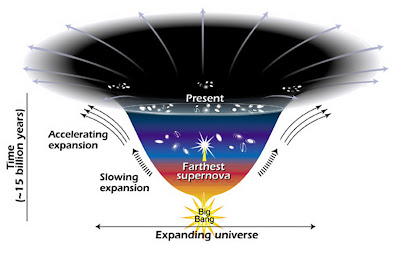 After the big bang about 15 billion years ago, the universe was not expanding very quickly and Einstein attributed it to gravity slowing it down.

Today the Universe is expanding faster and scientists do not understand why.
They also say that the universe is a flat disc.

They came with the name of dark matter which is something the universe is expanding into.
This dark matter doesn't seem to have enough matter in it, so scientists say the reason the universe is still expanding in disc form is because there is also dark energy which fills in the spaces in between and sorta compare it to a magnetic field.
This dark energy changes the speed of expansion to either being faster or slower.

Einsteins' gravity theory says that if you throw an apple up into the air it will fall down but with dark energy it doesn't.

So either dark energy, in a space vacuum , has a an expansion pull or Einsteins' theory is wrong.
I do not see them include that maybe our universe is a cell itself, with a vacuum of space.

In biology we have cells growing, dividing and multiplying. Maybe our universe does the same thing????

Verdi related the big bang to music and he said if we study the waves of the sounds, they should be able to tell us something.
The Hubble telescope has also been measuring super novae and the explosion of dwarf stars.

After one explodes, the light from it travels towards earth. This is known as a red shift.
The higher this red shift is, means light has been traveling longer and further back in time from when this explosion happened.

Since the universe is a vacuum, maybe something entered it from the outside and made a hole which then allows vacuum to escape and or maybe things to enter to create these expansion changes?
These are certainly interesting studies.
from beyond the beyond and talking about heaven just might be beyond our comprehension of what and where this is.

If we study cells, we expect a certain kind of behavior from them. If they become cancerous we try to destroy them. If they become too weak they die of their own accord but healthy cells remain and function normally because they receive the right upkeep but eventually they get old and used up and die too.

If man was a part of a cell, he is a part but not all, responsible, in the way a cell behaves.
He will live but faces mortality.

God's world is immortal. So where would his world be where cells do not die but keep the form
of man and some form of intelligence?

By studying two ends of a spectrum, conception and birth of mankind and the big bang in a vacuumed flat disc universe and the expanding universe, limited as we are, it doesn't take a genius to understand that there is soo much that we do not know and understand.

What we should understand, is that everything we touch to analyze, has some or is the result of, some kind of order.
The universe is not chaos. It has order to it if we look upon it from a macro view.
It has cause and effect attached to it.
Conception and birth has order and a genetic plan or we would not all be born looking like men with intelligence.

But the universe does have its' big bangs and explosions as people do in life, lol
and then things calm down.

I don't know but somehow, this gives me peace of mind, knowing this.
This, awesome power, in which we live, in a vacuum, has air for us to breath, water to drink, sunlight to keep us warm, snow to continue the process going, food for us to eat etc....

This is all amazing creation and why would we not live knowing that we are truly blessed to experience it all and cherish this planet, which offers it all to us.
Man, is nothing for God to worry about because this is not his world . He has another one for us.
He is not impressed with us. You cannot please him by fighting wars, in his name.

The devil claims this to be his world and he is nothing but a cancerous entity in a cell, trying to create war and havoc. He has his uses, to help man continue to evolve and to think
but he will never win because his world is mortal and it is tied to this planet.

Chaos produces storms, which are like cancerous cells and kill
everything in its path for it's own survival.
They stifle growth learning and understanding and production.
They kill life before it's time to go naturally on an already ordained path made for them to go on.

I can't help but think of all the children which will have to go through radiation just to fly in a plane today.
Now why would the devil want to hurt a child ? He caused the effect.

Anyway, I got off the subject of dark energy.
It will be interesting to see what else they find up there and where this is all headed.
It also inspires one to believe in the beyond the beyond and have faith that it will all come out ok and to do this requires what we believe to be unrequited faith.
It got us to believe in our own existence and so in the end, it will also take us where we need to go.


The below link is worth a look at
It has cities on the right hand side you can visit all over the world by just clicking.
Right now I just explored Calgary


Come Visit the World or explore just a city with me

I must admit that I don't understand much of this, but I do believe that God created an orderly universe.

Neither do I George lol but I still like to read up on things and try to read the symbolism I find in it.
The way they drew this drawing is like a goblet and yet the universe is a disk.
I disagree with the theory of chaos.
I just can't picture this universe as being all that there is.
I mean, here we are, in space, in something that we know exists and yet the depth of which we will never know.All I can think is that this universe must be like a cell in our own body and we are living in this cell. This cells' health is determined by how we treat it inside.but whether we treat it nice or not. is insignificant within the huge body it finds itself in. If there is a cure the cell will cure itself and if not, the cell will die and be replaced by another.
If there is a thorn, the body will purge itself of this thorn. If the thorn is poisonous then other measures will be taken to neutralize the poison.Why should the universe and beyond our universe if it exists, be any different?
Man is being taught that he does not need to adapt to order. He is born free to do as he wishes.
But the reason he is able to do this is because order allowed him to survive to live long enough to get this impression that he answers to no one.lol
Order is what keeps him alive.
Chaos is what makes him take one chance too many whereby one day he steps into the wrong hole and ends it all for himself.
Then we cry and look who to blame but there really is no one to blame.
If you live by the sword you die by the sword. and God protects those who protect themselves, so don;t go jumping off of cliffs lol
Everything we learn from the bible fits.All God asks is for us to have faith in him.
I don't think it's too much to ask.