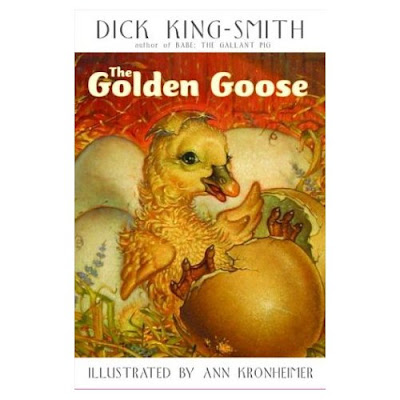 This is a great Christmas song some one wrote . (click on the line)

" While at the mall a couple of years ago, my then four year old nephew, Spencer, saw kids lined up to see Santa Claus. Having been taught as a toddler that Christmas is the holiday that Christians celebrate the birth of Jesus, he asked his mom, "Where's the line to see Jesus"?"

So these people sat down and thought hmmm . It would make a nice song.
Hope you like it.


After a huge meal of Thanks giving Turkey, I guess all the turkeys would give a sigh of relief if Christmas went back to the tradition of serving Christmas Geese instead. lol

I found the above book illustrated so beautifully with a gosling, that thinking of eating it would break ones heart.

It was Charles Darwin, who mentioned that goose for dinner in Victorian times, was a tradition.

The relevance of the goose throughout time is interesting. It represented the Egyptian God Amen and was deemed sacred. Amen was believed to be the source of all creation.

In 389 BC Rome, the goose was sacred to the gods Jupiter, Juno and Minerva. They saved the Roman Citadel by making such a racket when the Gauls approached to attack, they woke up the Roman soldiers.

Hunnukah is also celebrated with a roast goose.

It represents the return of Jerusalem from Syrian hands back into Jewish hands in around the year 165.

St Martin Tours, was a Catholic Saint against poverty, beggars and geese.Legend has it that he tore his cloak in half in order to give half of it to a beggar. The cloak was later miraculously restored.

Later, he hid in a barn full of geese to avoid being made a Bishop, but the noisy geese gave him away. He is said to have died around 367.

As a result, Saint Martin's day is celebrated on November 11, and goose became the traditional bird to be served that day.

Aesops' Fable, The Goose That Laid the Golden Egg, taught that if you let greed get out of control, you might lose everything.

Charles Dickens had Scrooge give the Cratchits a turkey instead of a Goose and may have started a new tradition but still, in spite of it, today, the Goose still means the same thing to many people around the world.

It means, to be thankful.

So whether you are rich or poor , with a big family or a small one, or even alone and looking to celebrate a special occasion like Thanks giving and/or Christmas, you can never go wrong with a goose.

It's symbolism and significance alone, gives one plenty to talk about around the table.

It's a beautiful bird as well as a delicious replacement for Turkey.

Thanks for your comment on my Wordless Wednesday ! I had to laugh, you know these are not shopping caddies, but WHEELCHAIRS !! yes it can be confusing hahaha !

We don't celebrate Thanksgiving in Europe but mostly a turky on Christmas. But it depends the countries. Interesting goose story !

Great song. I am going to send the link to my pastor.

I enjoyed both the song and the information about the Christmas Goose.
Thank you

Rhymes with plague = it is a good song to pass on. I did. lol

Gattina Life has so many stories to tell and you could spend your whole life listening and learning. :)