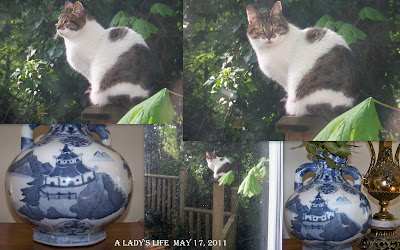 I often find myself in a precarious situation with this cat.
She is very independent and likes it that way.
So many times I have attempted to capture her on film and it was like she would hex the photo because it would never come out.
She is a nice cat when you leave her alone .
I guess it is because my son found her downtown and put her in his pocket to bring home.
She was tiny but already had her wild instincts inbuilt.
We named her Precious because this was the first word that popped out of my mouth when I first saw her. So she must know she is loved and once in a while lets us know by allowing us to pet her and carry her around for a while.
She has a fur coat of pebble looking spots and she loves sitting on that fence looking over her garden. It's her world.

Never lend a geologist money. They consider a million years ago to be recent.
A volcano is a mountain with hiccups.

Biology is the only science in which multiplication means the same thing as division.

One day the zoo-keeper noticed that the orang-utan was reading two books - the Bible and Darwin's The Origin of Species. In surprise he asked the ape, "Why are you reading both those books"?
"Well," said the orang-utang, "I just wanted to know if I was my brother's keeper or my keeper's brother."

-- Neurotics build castles in the sky.
Psychotics live in them.
Psychiatrists collect the rent.

Precious is a beauty!

Have you seen my posts about the kittens in our yard? The dad looks just like your cat! :)

I'll check it out Betsy Thanks :)

Oh what a cute cat and I love the name.;)) Cats are like that, very independent. Everything is on their terms - therein lies their charm.;)
Loved all the anecdotes today.;)
And thank you for your comment yesterday - so RIGHT you are about the first leap of faith being the most difficult one and then it becomes so easy. It is my experience too.;)
Have a lovely midweek,
xoxo

Precious is a very appropriate name for this cat. She certainly looks like a queen surveying her domain.

Thanks George and Zuzana :)

Cats are always independant ! I have four and they are all different but independant, that's the difference between a cat and a dog !
The volcano is a moutain with hiccups,hahaha ! I have to keep that in mind !

Gattina - my other cat Tatty, thought he was a dog.
He was raised by dogs but he died and now Precious is lonely. She loved her Tatty and he took good care of her.
She is rather spoiled because of him.
Another cat is wooing her and she screams at hom to stay away but he keeps hanging around cause he's lonely too. lol
Precious is spayed so there is no problem.