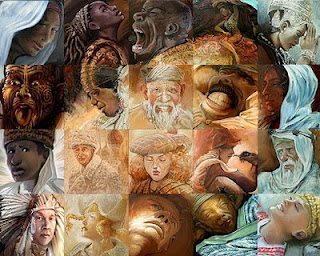 I baked a bakers dozen for my beyond the pale customers, who became cock a hoop.
I got it from the horses mouth they had no feet of clay and were fast to guild the lily.
And non too namby pamby were they either.
You got no pin money from them. One of them would always see a man about a dog after paying
peppercorn rent.
A pig in a poke gets them to weasel words at each other and I sure as the dickens, did not want to be a whipping boy


I sure am glad no one talks like this anymore lol

Some added a loaf to a batch of a dozen to be above suspicion.

BEYOND THE PALE In the 14th and 15th centuries the English king ruled and the surrounding area known as the pale. Anyone 'beyond the pale' was seen as savage and dangerous

CHAP Taken from the word Chapman It meant a merchant or trader. It in turn was derived from ceapman. The old word ceap meant to sell

COCK A HOOPThis phrase comes from a primitive tap called a spile and shive. A shive was a wooden tube at the bottom of a barrel and a spile was a wooden bung. You removed the shive to let liquid flow out and replaced it to stop the flow. The spile was sometimes called a cock. If people were extremely happy and wanted to celebrate they took out the cock and put in on the hoop on the top of the barrel to let the drink flow out freely. So it was cock a hoop. So cock a hoop came to mean ecstatic.

PEPPERCORN RENT In the Middle Ages and Tudor Times rents were sometimes paid in peppercorns because pepper was so expensive. Peppercorns were actually used as a form of currency. They were given as bribes or as part of a bride's dowry

A PIG IN A POKE This is something bought without checking it first. A poke was a bag. If you bought a pig in a poke it might turn out the 'pig' was actually a puppy or a cat.

GILD THE LILY This phrase is from King John by William Shakespeare. 'To gild refined gold, to paint the lily is wasteful and ridiculous excess'

FROM THE HORSES'S MOUTHYou can tell a horse’s age by examining its teeth. A horse dealer may lie to you but you can always find out the truth 'from the horse’s mouth'.

FEET OF CLAY If a person we admire has a fatal weakness we say they have feet of clay. This phrase comes from the Bible. King Nebuchadnezzar dreamed of a statue. It had a head of gold, arms and chest of silver, belly and thighs of bronze and it legs were of iron. However its feet were made of a mixture of iron and clay. A rock hit the statue's feet and the whole statue was broken. The prophet Daniel interpreted the dream to be about a series of empires, all of which would eventually be destroyed. (Daniel 2:27-44)

PIN MONEY In Tudor times and before when a merchant or tradesman made a bargain it was the custom for him to give some money for the other man's wife or daughter 'for pins'. (Tudor women needed lots of pins to hold their clothes together

WHIPPING BOY Prince Edward, later Edward VI, had a boy who was whipped in his place every time he was naughty.


An 80-year-old Italian goes to the doctor for a check-up.

The doctor is amazed at what good shape the guy is in and
asks,'how do you stay in such great physical condition?'

I'm Italian and I am a golfer,' says the old guy, 'and that's
why I'm in such good shape. I'm up well before daylight and out
golfing up and down the fairways. I have a glass of vino,
and all is well.'

'Well' says the doctor, 'I'm sure that helps, but there's got
to be more to it. How old was your Father when he died?'

'Who said my Father's dead?'

The doctor is amazed. 'You mean you're 80 years old and your
Father's still alive. How old is he?'

'He's 100 years old,' says the Old Italian golfer.. 'In fact
he golfed with me this morning, and then we went to the
topless beach for a walk and had a little vino and that's why he's
still alive. He's Italian and he's a golfer, too..'

'Well,' the doctor says, 'that's great, but I'm sure there's
more to it than that. How about your Father's Father?
How old was he when he died?'

Stunned, the doctor asks, 'you mean you're 80 years old and
your Grandfather' s still living! Incredible, how old is he?'

The doctor is getting frustrated at this point, 'So, I guess
he went golfing with you this morning too?'

'No, Nono couldn't go this morning because he's getting
married today.'

At this point the doctor is close to losing it. 'Getting
married!! Why would a 118 year-old guy want to get married?'

'Who said he wanted to?

Thanks for the information about the origins of these expressions. Thanks, too, for the laugh -- too bad I'm not Italian!!

george: a glass of wine and good spirits is all you need.:)

I LOVE idioms! And thanks for the early morning chuckle!

You are welcome jientje:)

i am fond of idioms although they can present quite a challenge to non-native speakers. and their origin can be fascinating :)