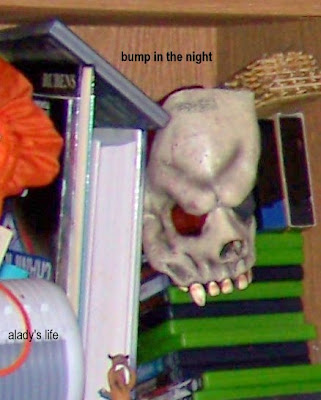 We often get bumps and never think much of them. But a bump could be serious.
Especially a big bump.
A few stories I remember well had to do with my 80 year old grand mother.

She lived in her own home and I was sent to live with her and go to college cause my parents didn't want me living alone in my own apartment.

So I kept an eye on her ,took her shopping, the hospital.
She was asthmatic so I had many emergency rides to the emergency room in the middle of the night, for this.

I began to get irritated after a week of being told about this rake behind the door.
It was like she had this obsession with this rake but didn't do anything to remove it.
As soon as you open the front door , there she was telling me about the stupid rake.

One day I came home from school and saw my 80 year old Grandmother standing with this humongous bump on her head, similar to the one shown on the skull mask.
I got so concerned and asked her what the heck happened?
She looked at me with these pitiful eyes and said:

"I stepped on the rake."

When she brought in the topic of the rake, I could not help but burst into laughter.
It wasn't funny. I had a very long day. The bump was huge and it could have killed her but the more I looked at her pitiful and then angry face because she saw I began to laugh, the more I laughed. I fell on the floor gasping with laughter, while saying to her.

"How could you do that? You did nothing but talk about this rake .....and then you went and stepped on it???????? It was behind the door!!"
She began to see the humor and started to laugh herself.

And so you see, as with children, who don't seem to understand the gravity of not listening to grown up warnings, old people and even adults do the same things.

After we both calmed down, I went and gave her some loving hugs and kisses ,with compresses and tea, as she earned it and then tucked her safe in bed and then........
I warned her about the rake.
lol

I'm glad your grandmother wasn't seriously hurt, but I must admit that the story is funny.

George: She pulled a few fast ones before I told her she could wait. Things are not that urgent to do until I get home.
lol