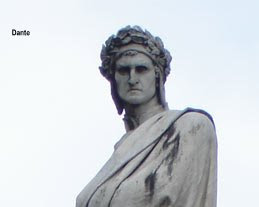 In those days Florence had two political parties the White and the Black Guelph.

Dante's Family was in the White Guelph when the Black Guelph took over.

Dante was in Rome and escaped execution.

It is then in 1301, that he began to write his Book Divine Comedy on humanism.

I was wondering why his Divine Comedy book was called a comedy when it was about hell and his conquering it to save Beatrice. Apparently hell is shaped like a cone in this poem/play.Purgatory is where most people end up at the top widest part They fix their sins and go to heaven but then the more sins you have, the deeper you go into the cone And the more squashed you become and tortured. Dante made for 9 levels of hell the ninth being the worst one.

So what I found from peoples comments on Dante was:

"Dante called the poem "Comedy" (the adjective "Divine" added later in the 16th century) because poems in the ancient world were classified as High ("Tragedy") or Low ("Comedy"). Low poems had happy endings and were of everyday or vulgar subjects, while High poems were for more serious matters. Dante was one of the first in the Middle Ages to write of a serious subject, the Redemption of man, in the low and vulgar Italian language and not the Latin language as one might expect for such a serious topic."

Inferno is the first volume (sometimes called Hell) Purgatory is the second. is the third. The Divine Comedy refers to the three as a whole.

It's because most people can only be bothered to read Inferno.

Reading it today one would never know how they classified books and I’d still be wondering why the title was Divine Comedy.

Now I guess you learned something too. Remember, every day, to learn one new thing. Loll

I DID leazrn something again today, thanks for that! Have a great day!

Jientje:
When we learn today, we forget times were different for the people we learn from.People had a different way of looking at things and maybe what we get out of a certain piece through interpretation, might not be what was intended by the author when he wrote it.

smart,
thank you for the beautiful insights.