Quetzacoatle Sheltered in Our Midst. 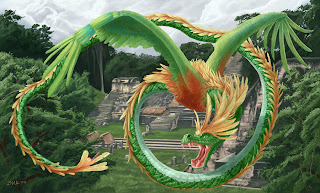 Worshipped by Aztecs, Mayans Toltec Inca , Mexicans and the world

Quetzalcoatl You are related to gods of wind, Male Venus, the dawn, merchants,

You are the symbol of fertility, internal political structures, war, and as creator.

Quetzalcoatl you are the boundary maker between earth and sky.

Quetzelcoatl – Cortes was seen as a deity of yourself returned.

Latter Day Saints had the Mormons believing you were a white bearded god or Jesus,

may be a new testament era Apostle of Jesus.

Quetzalcoatl how has your image changed from reptile to man to god? Many Legends

speak of the serpent people, including the Nagas of India

The Amaru of . You are found in the Hindu religion and in you are part

of their Voodoo rituals

the Serpent let go the waters upon the Earth, the Rainbow arose and the Serpent took the

You affected the Aboriginals of Australia who they said created mountains, rivers and

people while traveling from the north coast.

known to the ancient people as

the dragons or serpent people. Serpents were worshipped by the Lemurians and Atlanteans.

The serpent was a symbol

of divine wisdom. Later this worship turned into serpent cults among native people all over the world.

In Buddhism, wisdom has always been related, symbolically, to the figure of the Serpent.

In the Western Tradition it can be found as used by the Christ in the Gospel, according to

“Behold, I send you forth as sheep in the midst of wolves: be ye therefore wise as serpents,

and harmless as doves.”

The East Indian pantheon is connected with the Serpent Spirit and the Dragon Spirit. It has an

equivalency to the Burmese Nats,

or god-serpents. In and , and even in Central and , the Naga

stands for one who is wise.

In , the Naga is given the form of the Dragon and has a direct association with the

Emperor and is known as the “Son of Heaven”.

to speak their language, Naga-Krita.

The serpent was worshiped in:

The snake/serpent is a symbol of immortality and can be found on monuments, artifacts,

of this great symbol.

It can be worth considering… its immense significance and legacy on our planet.

Quetzalcoatl your name has reigned and been feared and prayed to at the same time,

by people who had no way of communicating of your existence.

You have touched upon most people of the world

Quetzecoatl what is your secret?
Why have you not taught man kind, in your wisdom, that he should live and let live

As our God has allowed for us?

Interesting post. I can imagine Angelina using the symbol for her latest tattoo!

I saw the jewelry. Its not bad. And then I tried to find out what it meant and came across Quetzecoatl.
So according to some people this is a good symbol and to others like me, I would never say a snake is the same as a dragon.
This is not the first time I see snake jewelry being worn as bracelets and rings.The snake is not only a symbol of wisdom it is also a symbol of trickery and manipulation.
I don't know how it can be compared to a Dragon who is supposed to be Noble powerful,just as well as wise.

What about Ephesus? Blogtrotter Two has it... ;) Enjoy and have a great week!!

Thanks Trotter Your blog is wonderful and leaves a lot to learn and think about.
:)

That was a great read. I wish I had learned these things when I was younger. So much to think about.

Sandy the world is indeed enlightening
You can study and learn your whole life and still die a fool.
lolI can't see how anyone can become bored.The Quetzecoatl seems to have surfaced in all parts of the world when communication was impossible.This is why people believe
someone must have distributed the same information around the world.